Gone are the days of status updates containing only pictures, videos and good one-liners. Just like music videos on MTV, they’ve given way to advertising, which led to unique programming, and the end of “music-only television.” The same goes for Facebook.

If you run the numbers, you’ll see organic reach on Facebook is down year to year. Others say it’s already dead.  At best, these days, you’re only going to reach 1 or 2 percent of your fan base organically on Facebook. Facebook's Vice President of Advertising Technology, Brian Boland, says there are two main reasons organic search is dropping like a rock.

First, there's too much content being published on Facebook, making visibility in the News Feed competitive. Facebook is also deliberately trying to show people the content most relevant to them. Your fan page alone will not get the job done.

If you want to reach your potential customers on Facebook, you’re going to have to spend a little money and put some ad dollars behind your posts. That also means putting together a strategy. There are things you may know about Facebook advertising and others you don’t. That’s why it helps to know some of the best-kept Facebook advertising secrets.

Lucky for you, I know a guy. His name is Brandon Zingale. He’s a social media influencer and Kuno Creative’s Demand Generation Specialist. He shared with me his Facebook advertising secrets.

You know if you’re going to advertise anything, anywhere, you’re going to need money to do it. What you may or may not know is that advertising on Facebook shouldn’t break your budget. You tell Facebook how much you want to spend on advertising, and Facebook will try to get you as many results as possible for that amount. Now, you need to spend at least $5 a week in some cases, but if you’re boosting a post it may take $5 a day. If you’re not spending enough on what you’re trying to accomplish, you will get an error message. You’ll then be given a chance to adjust your budget.

Brandon says you should run a test—first. Test a boosted post with $10-$20 and see how it does. If you’re happy with the results, keep it going. If you’re not, you may have to adjust and throw a little more money behind it.

Now let’s get to some of the juicy stuff. Some of the best Facebook advertising secrets I heard had to do with targeting. That’s because a lot of people don’t dive into the details. You can target audiences based on lots of things, like:

Someone’s purchase behavior exposes them. These are people who are in the process of buying something, and Facebook’s cookies give them up. Look for this option under “behaviors” when you’re building your ad.

You can go as far as breaking your audience down by where they live or what they live in (apartment, townhouse, home). You can also target parents, or by relationship status. If you’re looking for engaged couples you can target them by wedding registry. I know, sounds creepy, but it’s the best way to find the audience you’re trying to reach.

Only you know what you’re selling, and it’s up to you to figure out who is going to want to buy it. Pinpointing your potential customers’ purchase behaviors and targeting them with your ads is a great way to reach your audience and, hopefully, get them to buy.

This falls under the umbrella of Facebook advertising secrets because a lot of people don’t know you can target a customer list. But there are some things you have to have and have to do, first, before you can take advantage of this feature.

Your customer file has to be a .csv file, like an excel sheet, and input into Facebook. It is best to map your customer data by:

Facebook hashes the data you provide. Hashing is the transformation of a string of characters into a usually shorter fixed-length value or key that represents the original string. Hashing is used to index and retrieve items in a database because it is faster to find the item using the shorter hashed key than to find it using the original value.

It’s valuable to marketers because you can determine things like:

And unlike the cookie, which represents an anonymous user, the email address represents a known customer. It’s unique to that individual and remains persistent across all devices, apps and browsers.

When you start uploading your customer list, Facebook hashes it locally in your browser before it's uploaded to Facebook. After your hashed data is uploaded to Facebook, Facebook will match it against its data. The matches are added to a Custom Audience for you and then the matched and unmatched hashes are deleted. Here’s how it looks: 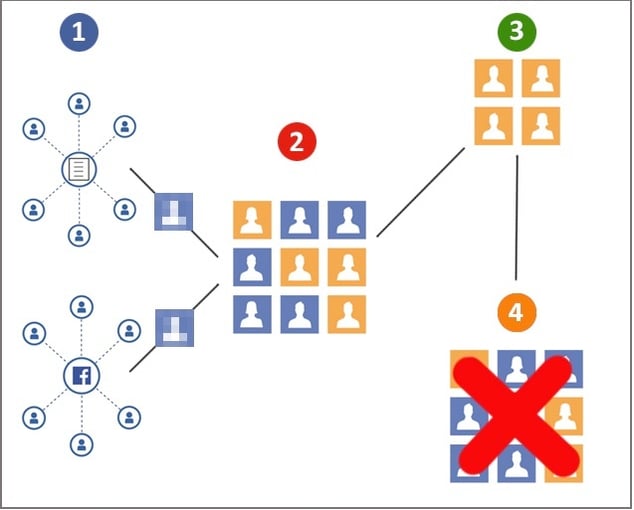 If I haven’t impressed you yet, this might. This is a Facebook advertising secret—no doubt. That’s because budget optimization is not available to everyone. They’re just rolling it out.

If you’re one of the lucky ones, you’ll find this feature under the campaign level, in the Ads Manager.It will get you more bang for your buck because it allows you to optimize your budget for both desktop and mobile. The beauty is that it does all of the heavy lifting for you. It will optimize your budget based on the results you’re getting.

Now that your audience is in the crosshairs of your campaign, it’s time to show them something. When it comes to Facebook, video is king. Brandon says if you have the option of posting video content in your ads, you should do it.


Facebook will even help you design a great ad. The site offers tips in its Ads Manager. Basically, the way the Facebook algorithm is working in 2018, by using video your advertisement is more likely to pop up and be seen. It will be more engaging because it’s a moving message.

If you’re going to post video, you’re going to have to know this Facebook advertising secret. By using video, you can also overcome Facebook’s 20 percent rule. You can do this by putting text in your video thumbnail. Here’s an example:

You see, Facebook sets a limit on thumbnail image size (it should match the aspect ratio of your video). Your thumbnail image may not include more than 20 percent text. If it does, your ad may reach slightly less people than estimated, or may not even run at all. You can use Facebook’s Text Overlay Tool to see what percentage of an image contains text.

Pay Attention to How Your Ad Looks

When it comes to Facebook advertising secrets, looks aren’t everything—they’re the only thing. Try using a white background to help your image or video stand out more. Facebook lets you change the background color of your status to make it more noticeable. The goal with any type of advertising is to create “thumb-stopping content.”

You should also test ads. This will give you the chance to see what works and what doesn’t. Pay attention to the “likes”, too.

Every good Facebook ad has a call to action. But that’s not the Facebook advertising secret you need to know. What you should know is that Facebook provides more options than just the generic “learn more” when it comes to CTAs.

You can change your call-to-action button within Facebook—there are 10 options. They include:

Here’s what it will look like when you get there. 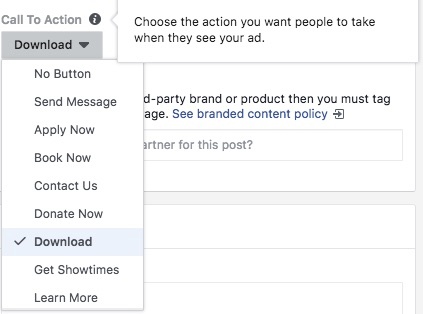 This allows you to customize your CTA button to the campaign you’re running. It can add to your ad, so to speak.

Of all the Facebook ad secrets we’ve shared in this post, this one might be the most vital. After you do your first run of your ad, look at the stats and use those numbers to drive round two of your campaign. If you’re seeing success somewhere (like with a particular audience) maybe you’ll want to throw a little more money behind the ad and target that audience only.

The same goes for campaigns that don’t work out so well. If you don’t get the numbers you’re looking for, adjust the campaign. You can use Facebook’s Account Overview in Ads Manager to see the exact demographics converting on your ads. This will help you adjust your audience to serve your ads to the right people.

This also goes for organic content. Check your organic content daily. Seek out posts that are doing well. If they’re getting numbers organically, try putting some money behind it and take it to the next level.

Advertising is a game. That’s why can make it fun—especially when it comes to Facebook. Remember to create a post, build an audience, see how it’s performing, and check to see if you’re getting conversions.

Facebook is just one of the ways to shift your budget to digital marketing. If you’re looking for more ideas, download our “Digital Marketing Acceleration Kit.” In it you’ll find our 2018 SEO checklist, our inbound marketer’s guide to paid media and how to create CTAs that convert.