Facebook Reach in 2018: How Many Fans Actually See Your Posts?

Hello? Anybody out there? Hey, you guuuys...

If you’re a brand posting on Facebook these days, you’re more likely to hear an echo than a response.

You’ve probably noticed the number of people liking or commenting on your posts has been dwindling for awhile now, but in the past year, it’s dropped off a cliff.

We dug into the numbers, and what we discovered is downright depressing. But it’s not all bad news.

Here’s what we found about Facebook reach in 2018, why it’s happening and what you can do to make sure your fans still hear from you.

The Facebook algorithm change that took effect at the beginning of 2018 was intended to show the platform’s users more of what they want and less of what they don’t. Its other aim was to keep users on the platform longer.

Of course, that meant displaying more videos and content users can view directly from their news feeds. It also meant showing fewer links that direct people away from the platform—like a blog post from your company page.

According to a private webinar Facebook hosted earlier this year, the platform prioritizes four things when determining what to show in your newsfeed:

The Facebook algorithm change also affected the way the platform measures reach. Each time a person logs in, their newsfeed loads approximately 250 posts. Previously, all of those 250 posts were counted as reach—even if the person didn’t actually see it. Now, reach is only measured if the post appeared in the person’s timeline and they scrolled through and saw it.

That means if you’re comparing Facebook reach this year to your reach in previous years, you’re no longer comparing apples to apples.

Those two factors, on top of other algorithm updates in previous years, contributed to the nosedive in organic Facebook reach.

Kuno’s own Facebook page insights show just how significant the impact has been. In the past 30 days, less than two percent of our fans saw our organic Facebook posts.

This is based on the average organic reach per post (165) as a percentage of our total followers (7,968.)

Our most popular post of the past month—a simple photo of our team—reached 291 people and resulted in a grand total of...four likes. (Yes, that’s what a popular post looks like in 2018.)

As our Facebook organic reach took a hit, so did our engagement rate.

Despite posting more over the past year—almost 300 more posts than the previous year—engagement dropped by almost 58 percent.

We saw 644 fewer likes, comments and shares from July 2017 to date, as this chart from SEMRush shows:

This breakdown of our Facebook engagement is even more dramatic:

You can see some decent spikes of activity last summer and fall in the chart above, and then it just drops off.

Could there be other factors contributing to the drop? Sure, it’s possible, but our Facebook strategy hasn’t changed all that much—certainly not enough to explain a decrease that significant.

It’s also clear that we’re not alone. Our clients are seeing a similar drop in organic Facebook reach. Other digital marketers have been lamenting about the downward slope for years.

Things really started to take a turn for the worse about four years ago, as this analysis by Social@Ogilvy shows. 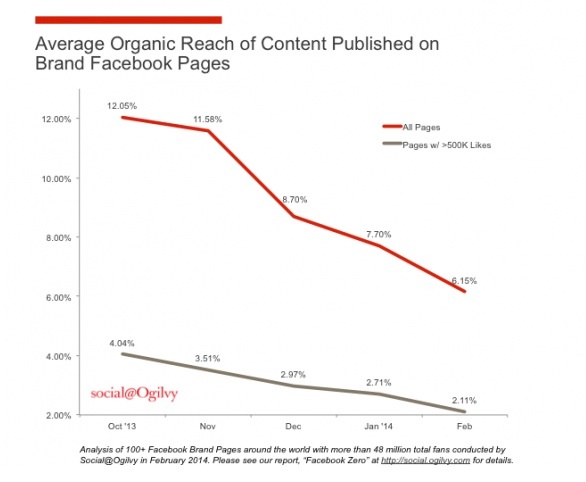 The agency studied more than 100 brand pages and found organic reach dropped by half for brands with fewer than 500,000 fans in 2014, from 12 percent to about 6 percent.

For the biggest brands, organic Facebook reach fell from 4 percent to 2 percent. We all thought that was bad. At the time, EAME managing director Marshall Manson said Facebook reps told his team to imagine what a social strategy would look like if there were no organic reach, according to AdAge.

If you’re wondering why you should even bother posting anymore, that’s understandable. But before you give up, know that despite all these changes, Facebook is still one of the best ways for many brands to reach people. With more than 2 billion active users and the average person spending almost an hour a day on the platform, it’s your most captive audience. But to reach them, you’ll have to pay for it.

Six Ways to Boost Facebook Reach in 2018 and Beyond

You may have been able to get away with posts that were purely promotional in the past, but in the post-apocalypse era of Facebook reach, that won’t fly anymore.

If you want anyone to see your organic posts, you have to put more thought into them.

That means thinking about what will trigger an emotional response, whether it’s an adorable photo of a puppy wearing a scarf with your company logo or something that inspires a different kind of “awe.”

Adobe Photoshop shares a lot of amazing user-generated photos on its page that you can’t help but stare at, like this photo that’s bubbling with creativity: 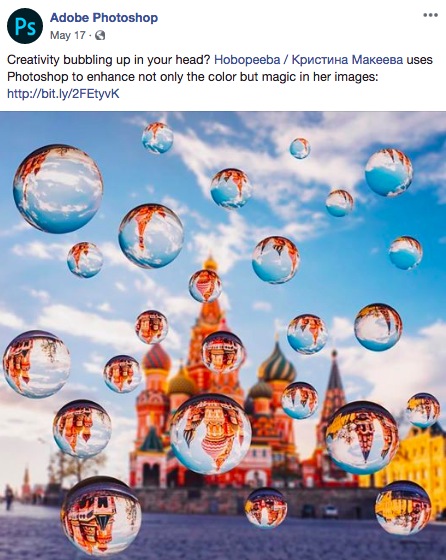 That single organic post got 1,700 reactions and almost 100 shares. To put that into perspective, Adobe Photoshop has almost 8 million followers—but that kind of visual creativity is something we should all strive for.

Likes and shares are great, but comments are Facebook gold for brands. That’s why it’s important to post content that not only encourages sharing, but sparks conversation.

Ask questions or post about current events as they relate to your brand, like Intel Corporation did with this post about the impact of climate change on polar bears: 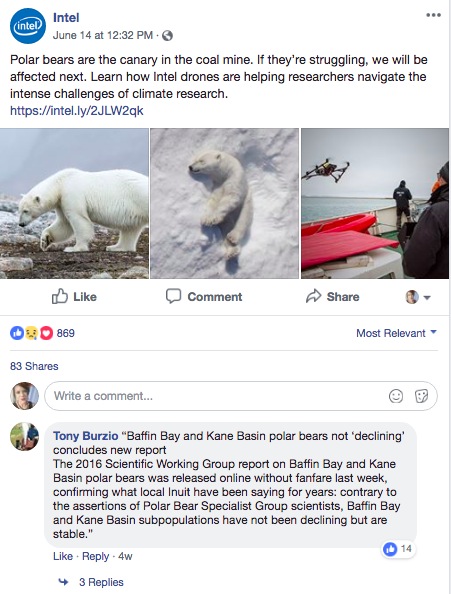 The post got 83 shares and more than 20 comments. A lot of brands are hesitant to talk about negative news or controversial issues, but Intel strikes the right balance by showing how it’s helping to solve the problem.

You can also encourage comments by asking your fans to share photos or asking them to share what they think about your product or service.

Take a cue from retailers and consider offering an incentive for sharing. Italian shoe company M.Gemi sent an email to people who recently made a purchase and offered a $50 discount to customers who used Facebook to refer their friends. 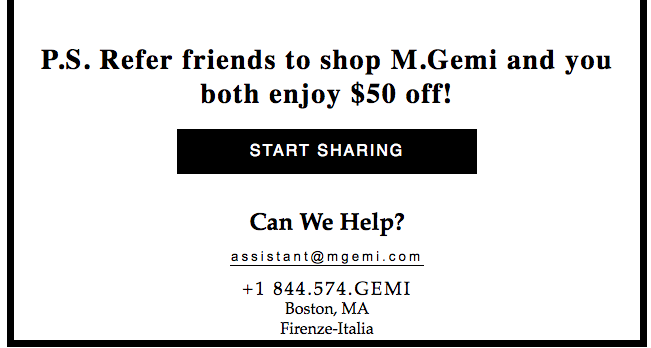 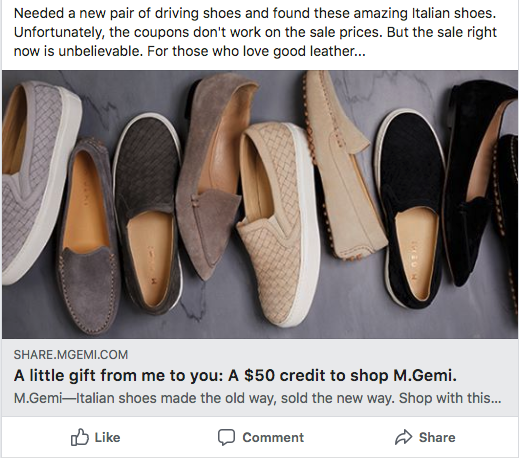 You’ve probably noticed you see more native and live videos than just about anything else on Facebook these days. That’s no accident—those videos keep us all on the platform longer, which is exactly what Facebook wants.

And smart marketers are finding creative ways to use video marketing to boost their organic reach on Facebook.

Although everyone loves a viral video, that doesn’t always need to be the goal. Video can be a way to promote an event, invite people to try a demo or bring more life to a piece of content. Hyland Software used a short, funny Facebook video to turn an ordinary event promo into something more memorable:

Following these best practices will amplify your organic Facebook reach, but they’ll only take you so far. If you really want your brand’s voice to be heard on Facebook in 2018 and beyond, you need to pay the piper.

Spending even a few dollars can have a dramatic impact on the visibility of a Facebook post. Kuno spent $30 to boost a post promoting our Lunch & Learn video, and that post reached 2,626 people within a week. Nearly 1,500 people watched the video. 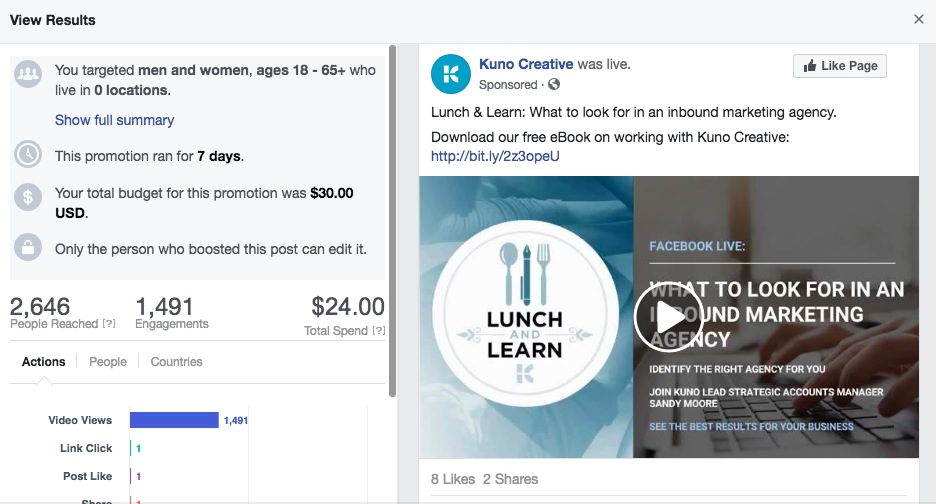 Compare that to our average reach of 165 people for a non-sponsored post, and paid reach has more than 10 times the impact.

Boosting isn’t a replacement for a strong social media strategy, but it is a way to make sure your fans see your most important posts. Use boosting strategically to promote things like upcoming events and content that will lead to conversions.

With Facebook’s advanced targeting options, you can advertise to users based not only on their demographics and location, but on many different attributes. Want to zero in on tech-savvy, Gen X HR directors in the Midwest who are new to their position? Facebook advertising can make it happen.

In addition to these core audiences, you can also use:

There are so many options with Facebook advertising that it can be difficult to know where to start. A marketing agency with expertise in demand generation and a partnership with Facebook can steer you in the right direction. An agency can also help you set up ad campaigns, monitor them and make adjustments to help you reach your goals.

The drop in organic reach means Facebook may no longer be your best channel for reaching new audiences. However, it’s still a great way to remind people about your brand once they’ve gotten to know you a little better.

Let’s say a potential customer finds your website through a Google search, spends a few minutes clicking around and then decides to come back later.

Because they’ve already shown interest in your company, they’re much more likely to click on the ad compared to someone who’s never heard of you.

Facebook Is Just One Piece of the Digital Marketing Pie

The days of using Facebook as a megaphone to broadcast to millions with little effort are clearly coming to an end.

For marketers, that’s incredibly frustrating—especially if you’ve spent years building up a huge fan base. But for Facebook users, it’s a good thing. Would you rather see more photos of your friends’ adorable babies and videos of Jack Russells riding horses, or more ads? (If you’d rather see ads, you’re in the right business, but you really need a hug.)

Facebook is still one of the most captive audiences available to you as a marketer, but with “Facebook Zero” becoming a reality, you need to have realistic expectations.

The days of using Facebook for free advertising are dwindling. You’ll need to put more thought into your Facebook posts and start investing in paid advertising, or you’ll just be shouting into an empty cavern.

And just like your investment advisor told you, you need to diversify. It’s never a good idea to place all your bets on one platform. If you want to attract new customers (and keep the ones you have) you need a cohesive demand generation strategy across multiple channels.

To learn more about effective demand generation in 2018 and beyond, check out The Inbound Marketer’s Guide to Paid Media.

As the content manager, Annie manages a team of brand journalists and is the driving force behind the content strategy for companies in a wide range of industries, including healthcare, technology and professional services. Relying on interviewing skills she developed in her seven years as a journalist, she uncovers insights about what motivates buyers in these industries and uses that knowledge to shape client websites and editorial calendars.
MORE FROM THIS AUTHOR >

5 Ridiculously Simple Marketing Efforts That Will Transform Your Results