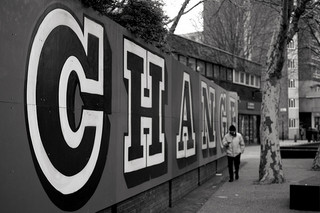 How Much Has Marketing Really Changed?

A common theme in marketing circles today is that there’s been a monumental shift in how marketing works. In a world with Google and Facebook, our marketing consciousness has certainly shifted from interruption to inbound, mostly because consumers have much more power in determining how and what they see. Even Facebook advertisements can be hidden so you never see another ad from any given advertiser in your news feed again.

I’ve tuned out silly GEICO commercials, but other people in the Kuno office will go around on Wednesday saying, “Guess what day it is,” like that happy camel on hump day. (I had to look up the advertisement on YouTube before I even remembered seeing it before.) But I’ve also spent more time than is really necessary looking at the advertisements in magazines, where others might simply have tossed the publication in the trash or flipped the page. Interruption is in the eye of the beholder.

The problem with marketing has been that social media, search engine optimization, websites and email marketing have been considered “digital” marketing for more than a decade. Forcing these tactics into a digital silo makes it near impossible to integrate them into the broader marketing strategy.

Moreover, some digital marketers have used words like “game-changing” and “revolutionary” to describe their tactics. On soapboxes, they made it known that what they were doing was the future, often times ignoring the past. It’s almost as if they never sent out a press release using a fax machine or made a print ad buy in their careers. For many, that may be true. But savvy marketers know the next big thing in digital marketing isn’t digital at all.

One of my favorite articles on just how much marketing hasn’t changed is “Offline is the New Online Link Building Strategy” published on Moz.com. It’s a great case study on a high-end fashion retailer using an event to draw attention to its brand and seeing it distributed across social media channels. Today, these events are considered offline link building, but before the internet was around, we would have simply called this public relations.

Back in the 20s, when the father of public relations, Edward Bernays, was hired to get more women to smoke cigarettes, he used the Women’s Liberation Movement to do it by having women smoke “Torches of Freedom” in NYC’s Easter Sunday Parade. He had a photographer take pictures and then published those pictures around the world. Today, he simply would have used Instagram and hashtags to make an impact.

Events still need to grab people's attention. Advertisements must do the same thing. And your tweets, your Facebook status updates, your content, all parts of your marketing—they need to use the same triggers to get someone to take action as they did when people saw an advertorial in a trade magazine. The immediate actions may be different (a like or a retweet), but in the end, the goals are the same: To build awareness and generate leads/sales.

Seven years ago, Time Magazine declared that “You” were the person of the year. And it’s true; it’s you that matters. With so much marketing data at our fingertips, targeting the right buyers at the right time has become much, much easier for businesses of all sizes.

Marketing was terribly inefficient without the intelligence that is commonplace with most marketing and advertising platforms. When marketers began to decrease their print ad spending, it wasn’t because print advertising was a bad idea; it was just less intelligent compared to most digital platforms.

But even some staples of digital marketing, like Google Adwords or direct email marketing, aren’t as smart as they could be. Google’s advertising platform has a competitive disadvantage when compared to Facebook and LinkedIn because the competing platforms offer more and more targeting based on demographics. Keywords used to be all the rage, but compared to likes or group relationships that can be combined with other demographic factors, they really don’t provide any targeting.

Likewise, direct email marketing should be getting smarter, but it’s not. I tried to send an email out via a trade website a few weeks ago but couldn’t even target by title or industry. Even Kuno’s contact database on HubSpot has that capability. The ability to hyper-target individuals based on their own actions and interests is really where the difference lies between marketing then and now.

Making the New Old and the Old New

The fundamentals of marketing really are the same as they ever were. But the media landscape is different. What that means is the money you spend on new media buys can’t just be wasted on anything. You really do need to put as much creativity and strategy into the content of those ads as you would a print one. Plus, if you’re creating blog posts, eBooks or guides for content marketing purposes, it makes complete sense to advertise these items just like you would a free demo or a sale.

On the flip side, the older tactics like direct mail can be updated with tools like Cloud2You or MarketSync, which deliver mail to individuals based on behavior rather than sending unsolicited mail to large groups. And rather than sending all of those unqualified tradeshow leads to sales, send them targeted email offers educational in nature so those leads can be nurtured before being sent off to the sales team.

Simply calling this integrated marketing isn’t enough. That still indicates a certain level of separation in tactics. Instead, the team that tweets should be the team that buys the ads in trade magazines. The team that emails should also be the one that direct mails. It’s time to move into a post-digital marketing mindset. After all, marketing’s value isn’t in the kind of tools we use to get attention; it’s knowing what tools we need in the first place.

Dan Stasiewski is Technology Director at Kuno. When he's not talking about marketing data and trends, he's probably in a movie theater... or randomly breaking into song. You can connect with Dan via Twitter, LinkedIn or Google Plus.

Supercharge Your Trade Show ROI with This Strategy

How to Strategically Spend Your Extra Marketing Budget