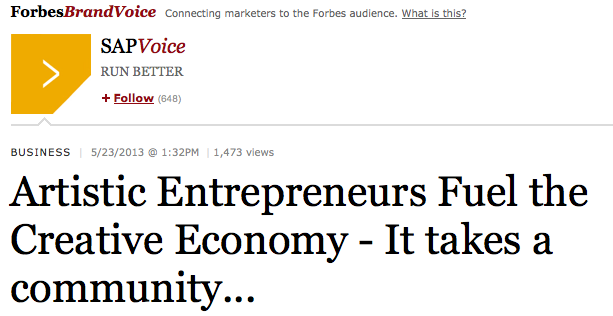 Should You Consider Native Advertising?

Native advertising is the 800-pound gorilla in the room SMBs have never heard of. Big brands know all about native advertising; it's the hottest thing since sliced bread. eMarketer reports native advertising will grow to about $4.6 billion by 2017 and will be about 42 percent of total social ad spend. But small-to-mid-sized companies are still struggling to grasp and exploit the value of content marketing, so hybrids like native advertising are not even on their radar yet. Let's take a look at the various kinds of native advertising and consider the possibilities.

What is Native Advertising?

Think about blending content marketing with online advertising. Take a blog post, for example. Instead of placing an ad in a box (labeled "advertisement") at the top, bottom or sides of the blog post, blend it into the post itself in a more subtle way (or maybe not). In most cases the ad looks like it's part of the website design (hence the term "native") and often appears to be consistent with blog or page content and is often positioned within the content stream. Here is an example from Forbes in a branded column called "BrandVoice." Here SAP (SAPVoice) has sponsored a blog post on a group of artist/entrepreneurs in Gloucester, MA, describes their work and includes branded links to their websites.

It's clearly a sophisticated, themed, well-written piece of advertising dressed up as a blog. In fact, you have to look pretty hard to realize this is advertising and not an everyday blog post.

Native advertising comes in all shapes and sizes. Buzzfeed lives and breathes on native advertising. This trendy video and photo sharing site mixes in sponsored content with user-shared content seamlessly. This trucker photo gem was part of Airbnb sponsored post on "13 Awesome Ways to Make Your Roadtrip More Epic." 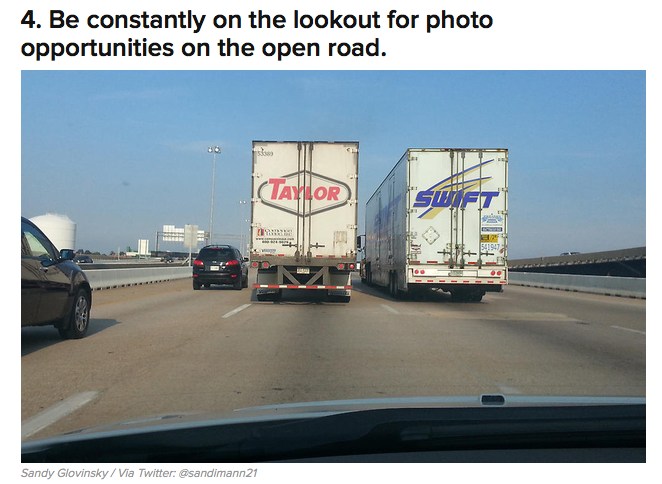 More familiar to many of us are Facebook Ads and Sponsored Stories. According to Facebook, "Sponsored Stories are messages from your friends about them engaging with Pages, apps or events on Facebook—stories that are already eligible to be in your News Feed. An advertiser has paid to show the activity as a sponsored story so there’s a better chance you will see it." Here's one from Zappos that showed up in my timeline because I like the Zappos page. Notice this obvious advertisement is complete with likes and comments, like any other Facebook post. Pretty sneaky, huh?

What are the issues?

While you can find native advertising on nearly every media outlet online these days, there is considerable debate about disclosure of sponsor information. The Wall Street Journal, for example, is pretty careful about the disclosure issues, fearing to lose its core customers. "We have sponsored streams of content and dedicated content pages that are very clearly identified as sponsored content,” noted Nina Lawrence, WSJ’s VP of global marketing, ad sales. “We want to avoid any confusion between Wall Street Journal content and a sponsor’s content."

Google is taking a hard look at best practices for using "advertorials" and other native advertising in your website and blog. According to Peter Kafka, "Google has been warning publishers that if they run deceptive native ads, or monkey around with the links in those ads, they could get penalized by Google’s search arm, as well as the Google News team." Here's Matt Cutts himself weighing in on the issue.

Many content marketers see this as blatant hypocrisy, since Google is in many ways the King of Native Advertising. Mr. Kafka goes on to show that apparently the Google display ads team and spam chasers aren't on the same page. "...in a blog post by Neal Mohan, Google’s display ads boss, the company is formally acknowledging that it’s going to make native ads a part of its business."

However these debates shake out, native advertising is here, probably to stay, and it's getting a lot of attention. What's the bad news for SMBs? It ain't cheap. Here's a few examples shared by Josh Sternberg and Digiday:

What do you get for all the green? Lots and lots of eyeballs. We're talking millions of eyeballs. So I guess we're looking at a few years before native advertising, as we know it today, becomes affordable for SMBs. We'll still have Google and Facebook, won't we? We'll see about that. These native advertisers are making a ton of money, and everyone wants a piece of the pie.

What do you think?

With over 30 years of business and marketing experience, John loves to blog about ideas and trends that challenge inbound marketers and sales and marketing executives. John has a unique way of blending truth with sarcasm and passion with wit. Connect with John via Twitter, LinkedIn or Google Plus.

The 3 B’s To Consider Before Rebranding

How Long Does it Take for Content to Rank?

10 Hot Digital Marketing Trends You Need to Know in 2020