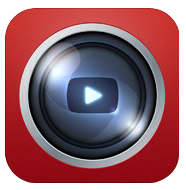 An iOS app released last year but just now receiving a lot of attention is Google’s, YouTube Capture. This app allows anybody with an iPhone or iPod Touch to record in-the-moment video and post it straight to YouTube. They can even share it via Google+, Twitter and Facebook without ever leaving the app. Users are also able to upload videos from their camera roll to the site. Here, we take a look at the new app and its ability to share our videos, whether they are for business or pleasure.

This is a great app if you are looking to capture something and immediately post it to YouTube, like I did Sunday afternoon (see video to left). If you are looking for a way to easily piece together a short video and upload it to YouTube, there is a work around, but it will take a little longer. My suggestion is to use your iPhone camera to shoot a series of quick shots and take those into an editing app such as iMovie. Once the video is edited, save it to your Camera Roll, open YouTube Capture and share it.

I decided to take this app for a test run this weekend while biking and was able to get some great footage. The simplicity of the app made it easy to pull out of my pocket, shoot the sunset in my neighborhood and, once I stopped, upload the video to my YouTube account. (This action is not suggested for those with bad balance; I made sure I was clear of any traffic before attempting.) I also took a compilation of short clips and pieced them together using iMovie. The result is the video you see to the left.

Use YouTube Capture to post family outings and videos of the kids, or use it for company events and conferences. Go ahead, take the app for a test-drive and post the URLs in the comments below for all to view.

With a degree in Electronic Media, Dan Romanski has five years of video production, both professionally and independently. When he is not assisting with projects at Kuno, he can be found exploring different parts of Cleveland with his camera. Connect with him on LinkedIn.

Dan Romanski helps companies connect with their contacts through marketing automation and lead nurturing campaigns. When not at work, you can find Dan exploring the outdoors or at a hockey rink.
MORE FROM THIS AUTHOR >