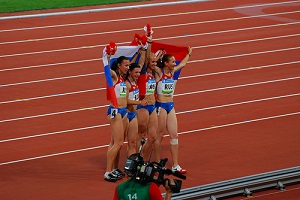 4 Ways to Earn a Gold Medal in International Social Media

With the Olympics front of mind right now, being hip to various cultures is today’s rave scene. The Games brings together more than 200 countries and 180 languages. Social media is abuzz with 2012 Games frenzy. So for some, it’s not exactly a huge Olympics-caliber pole vault leap to start considering international social media.

Yes, your plate is already heaped with social media duties. And yet, expanding your social media playground into foreign territory is hard to ignore, especially since so few are doing this. And when they do, it seems like problems abound. Here are a few tips to help you snag a gold medal in global social media.

Maybe you’re one of two people at the helm of the company’s social media program—or maybe you’re the lone coordinator bobbing along in a sea of interactions. Whatever your situation, it is imperative that you make sure your team has the bandwidth—or can acquire it—in order to scale to a larger program.

Info-dump overload is already a daily risk when you’re prowling through your social media avenues in your native language. Imagine how this gets compounded when you dip a toe into Japanese, Brazilian or Russian social media territory in addition to your home base program.

So to help you succeed, gather input from all stakeholders on who should handle which duties and whether you need to augment your team. If one post goes viral, who will monitor the interactions? The stream of conversation will probably be unpredictable from week to week; social media users might be relatively quiet in the U.K. but positively raucous in India. Without a firm plan in place for staffing, good luck planning your work week and workday—or rather, sticking to it.

Be aware that translating your social media content quickly still requires you to be consistent in your messaging. You already risk getting swept up in the usual tidal wave of social media tweets, posts and pins. Now it’s going to increase exponentially by appearing in multiple languages in real time—at the speed of Michael Phelps.

Your followers can potentially generate content a lot faster than you can translate and respond in an unfamiliar language. And you can’t spit out just anything using a free online translator because an inaccurate translation could offend your followers—and hit your brand in the gut. Another option is machine translated social media content that is reviewed and edited by actual humans. Since people are reviewing machine-generated translations to make sure they don’t totally confuse readers, the quality will be a lot higher. Of course this means laying out more money, something that may not be feasible.

You need to plan a separate engagement strategy for each market

The good news: Recent research by Forrester says emerging markets like China and India are in love with social media. The somewhat “meh” news: Age isn’t much of a factor, so trying to typecast your user base will be a challenge, if not impossible.

First, figure out which markets you already enjoy the highest engagement with using web analytics. Where are most of your fans coming from? Which social media platforms do they use and prefer? What types of content does each audience favor?

Images, phrases and campaigns in general all need to be carefully researched and planned since standards and expectations differ in each culture.

For certain audiences who lack the freedom of choice, you need to think about what not to say. You absolutely cannot entice your followers into saying anything that may get them into trouble or open up a discussion that could lead them into dicey political waters. A post like “Hey, how lame is censorship?” on Chinese platform Renren would not end well. Seems like a no-brainer, but those of us who are used to speaking our minds on everything may find it difficult to think before posting.

Endurance, speed and strategy—all key for Olympics athletes looking to score at the Games. And they also happen to be your ticket to snagging a figurative gold when going global with your social media program.

Is social international expansion on your radar? Have any of your own coaching tips? Chime in below!

Courtney G. Huber, M.S. is a professional writer and marketing specialist at Sajan, a global language services provider. She studies trends in marketing communications and creates content for B2B audiences while holding fast to the belief that even B2B marketing content can be entertaining and cool.