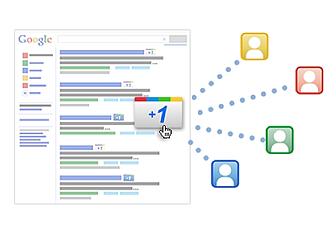 Google’s +1 is an attempt by Google to leverage the proliferation of Facebook’s Like button for their own benefit.  Facebook has done a good job at training internet users to give their input on content by “liking” it.  Google is tapping into internet user’s acceptance of this concept.  On the surface this looks like a good idea.  However, given Google’s track record of recent debacles, i.e. Buzz, Wave, I’m not quite convinced that this will be a good move and here’s why. . .

From the reports I’ve read it is clear that Google intends to use the data garnered from +1 in their search algorithms.  I’ve even read that this data may replace page authority and linking metrics in their algorithms.  If this is true it seems awfully easy to game.  However, according to SEOmoz it’s not that easy to game and they give a pretty thorough explanation as to why (see below).  Even with SEOmoz’s explanation I would argue that Google +1 is still easier to game than the linking algorithms.

+1 & Social Metrics Will Be Hard To Game

Previously the biggest objection I've heard from SEOs about user-generated signals is that they are easy to game. Well I'm not so sure. Think about how much information Google has on you and all the ways they can justify your profile is tied to a real human being account. For example - to show you're a real human being Google could look for the following signals:

Gaming the linking algorithm requires dozens of people to go and find websites that will allow a person to add a follow link with particular keyword phrases in the anchor text.  It’s not about finding just any website either.  It’s about finding websites with real authority in order to maximize the effect of the backlinks.

The above scenario posed by Google’s +1 is easier to game.  Rather than having dozens of people look for hundreds of high authority websites to build links on they merely have to go and set up accounts on Google sites.  Then it’s as simple as clicking on the +1 button.  If they are full time link builders they will have eight hours or more per day of “real” activity on the Google accounts.  This will help solidify their authority to Google and make gaming the search algorithms easier than building backlinks.

According to Gartner, mobile web access will surpass PCs by 2013.  How will Google fit +1 on a mobile search interface?  Google mobile is already pretty crowded.  If this mobile trend wasn’t so steeply pointed northward it wouldn’t be such a big deal, but over time this trend will have a very negative effect on Google’s search results because the data will be almost exclusively gathered from PC users - and PC users are shrinking fast!


It makes more sense to me for Google to continue to rely on the user generated data it's getting through Facebook and Twitter.  This metric is not easy to game.  Maybe SEOmoz has it right - Google's +1 is a good thing.  However, only time will tell and until that time comes I will remain skeptical.  What do you think about the new Google +1?