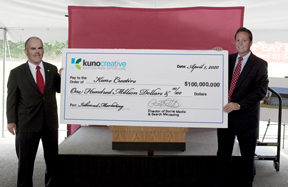 Founder and CEO, Chris Knipper, credited the passionate and dedicated work of the Kuno team for this landmark achievement.

"I'm immensely thankful to everyone at Kuno for making this
possible. It makes all the long nights, the endless Mountain Dew
and stale Doritos worthwhile."

Co-Owner and Executive Vice President, John McTigue identified the key values of culture and community as cornerstones of Kuno's success:

"Building a culture of innovation and creativity has always been a
priority for Kuno. And whether it's inbound marketing for our
clients or ourselves, we focus on building and engaging an
expansive community."

"I knew Chris was destined for greatness the minute he told me he
played in a Greatful Dead cover band in college. For me, the
Greatful Dead were the very first inbound marketers."

Current and former employees were enthusiastic about the news. Former long time Account Manager and current mother of 7, Laura Liatti, gushed about her time at Kuno:

"The people of Kuno consistently amazed me.
Work was an adventure I looked forward to every day."

What Social Channels Are Right for Your Business?