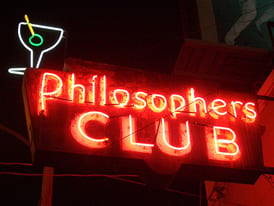 The Philosophy of Inbound Marketing

Sounds like an oxymoron doesn't it? Mixing philosophy with marketing. Those two words seem to be at opposite ends of the human endeavor scale. Philosophy deals with the larger truths, the wisdom behind what we say and do. Marketing is pure needs gratification, finding a way to sell your stuff to a group of unwary people. Here's the thing. We marketers get caught up in the results side and the tactics and technology, often forgetting about the real reasons that inbound marketing works. Inbound marketing is different from outbound marketing because it is based on voluntary relationships forged from reputation and trust. This 'philosophy' has several important elements that should not be overlooked in our zeal to generate leads and ROI.

This concept was introduced by Fred Wilson at a recent Ad Age Digital Conference.The idea is that through publishing blogs and other content and engaging in conversations with people, we earn their respect and interest that can fuel brand loyalty and advocacy. Contrast this with paid media, where we pay a fee and broadcast our message without asking permission and without engaging in conversation. Couched in those terms, in today's marketplace earned media is bound to be more successful as long as we don't confuse popularity with loyalty. In other words, web traffic, Twitter followers and Facebook "likes" are probably a good measure of how loudly we are shouting, but do they measure how much is being heard? Perhaps we should focus more on blog subscriptions, repeat visits and leads that get converted to something more personal, like customers.

Give More Than You Take

There's a reason why influencers influence. They work hard at their craft not so much for personal gain but more for the love of the game. Most of them really want to help others avoid the mistakes they've made and find a better path to success or enlightenment. Most influencers are truly happy when they get feedback, because they know they have been heard, and that's the entire mission. Marketers would love to be influencers (and many are), but it's not so easy when your motives are less than pure. All of us sell constantly. We're always trying to convince someone else that we're right or that it's Mexican food night instead of Italian. A Marketer would talk about the great food and low prices. An influencer would ask the other person what they wanted and suggest some options.

Shut Up and Listen

Once you graduate from Earned Media and Altruism School, you find yourself up against the most difficult challenge of all - the loud roar of your own voice. It amazes me how everywhere you turn people are talking, as if talking is more essential to life than breathing. Social media is great when it's truly social, but how often is that? Seems to me it's mostly blah, blah, blah. Do this, read that. Check out my stuff. What sticks is when someone is actually listening and seeks to intelligently respond to your question. That's magic. Marketers would benefit greatly once in a while by shutting down the marketing and listening for a change.

That's it. End of sermon. I know you have something to say, so I'll shut up and listen.