If you missed yesterday's HubSpot classic video, "Foursquare Cops", you probably are alone. It went viral right away, and it's still creating lots of buzz as we speak. By way of a one line review, it's clever, funny and topical. It pushes all the right marketing buttons by making fun of Foursquare, one of the hottest new social media apps, and by showing off HubSpot's creative talent. Is it about inbound marketing? Not specifically, but who cares? The video rocks, and because of that, it spreads like wildfire on YouTube, Twitter, Facebook and everywhere else. But is this kind of viral video success story within reach for you and me? That is the question.

Creating a Viral Video Is Not Easy 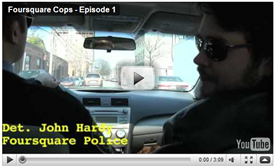 Think about what draws you to a video and compells you to refer it to a friend (or millions of them). They're usually funny, original, well-produced and timely. Sometimes they're just lucky, in the sense that someone captured something amazing on video by being in the right place at the right time. More often, they require a great idea, planning, time, people and talent. Few businesses have all of these components in-house, so they hire professionals to get the job done right. The more steps involved, the less spontaneous the video becomes, and spontaneity seems to be a key factor in video popularity. Producing a video can also be expensive and time-consuming. Yes, you can come up with a great video on the cheap, but how many of these attract more fans than your immediate family and friends? As in any other kind of marketing, if the potential for generating new leads outweighs the cost, it's worth a shot.

What can you do to grab some of the viral spotlight for your company?

The best advice I can offer is to round up the most creative people you have and ask them for ideas. Ultimately, you want to foster a creative culture that attracts talent from within as well as from outside your company. Not easy to do. HubSpot is a great example. They look for people with ideas, then they turn them loose. It takes commitment as well. You can't just say, "OK staff, go out and make me a viral video". You have to assign resources and time, or it will never happen. Don't expect to go viral on the first or second try. Again, it's not easy to know what will catch fire and what will fizzle. You have to swing at a few pitches before you understand the pitcher.

What are your plans or experiences with viral video?