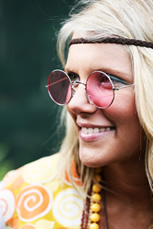 Boomers are all over social media, especially Facebook, according to a recent report. Wondering why these old farts (like me) are updating their profiles, tweeting, and otherwise hanging out in social space? Actually, it's in our upbringing and collective life experience. We love social media because it reminds us of who we are.

If you watched Tom Brokaw's special "Boomers!" last night, and you aren't a baby boomer, you got a glimpse of what makes us boomers tick. We were born after WWII and the Korean War, and most of us grew up in the 'burbs built during the post-war 50's. We were hooked on TV dinners and TV shows like Laugh-In and the Monkeys. We were influenced by space exploration and devastating events like the JFK and MLK assassinations. We entered puberty under the heavy shadow of Vietnam and the Cold War. Many of us became rebellious and many more experimented in everything including sex and drugs and rock-and-roll. We turned to each other for support and we banned together like no other generation before or since. As we grew up we became obsessed with material things and we bought it all on revolving credit, even though our parents warned us that someday (i.e. now) it would all come crashing down on us.

So now where are we boomers, and why are we into social media, tools that were designed for kids?

Hey all you boomers out there, how do you use social media and what works for you (or doesn't)?