In October 2014, a cross-functional team at HubSpot devised a plan to boost sales conversions. They realized that creating boring content wasn’t going to move the needle. They needed a fresh approach to speak to their leads. Brainstorming led to the idea of leveraging five psychological principles. The result was a triple-digit increase — 243 percent — in sales products revenue from mid-2015 to January 2017.

In November 2017, Scott Tousley, Senior Growth Marketer at HubSpot, delivered a presentation to the Austin HubSpot User Group meeting (he also delivered the presentation at the Inbound 2017 conference). In it he outlined the five tactics, described how his team implemented them and cited the results they gained.

Tousley began by pointing out that content alone does not equal revenue. “It’s one piece of the whole puzzle, which also includes product, UX, sales, academy, support, leadership, recruiting, training and more,” he said. “However, content is very important and needs more than just a boring approach or cursory update to stand out and achieve results.”

Here are the five psychological principles, how HubSpot applied them to sales enablement and the conversion results it gained from each principle.

Psychological Principle 1 — The Pareto Principle (aka, the 80/20 rule)

The Pareto Principle, named after economist Vilfredo Pareto, is the observation that most things in life are not distributed evenly—the majority of outputs come from a minority of inputs. It can be applied to a variety of scenarios, for example, 20 percent of the customers create 80 percent of the revenue, and 20 percent of the features comprise 80 percent of the usage. The key point is that each unit of work (or time) doesn’t contribute the same amount, and to maximize your results, focus on the 20 percent.

How HubSpot Applied the Pareto Principle

As his team approached each research-based principle, they asked themselves: How can we apply this to our marketing and sales challenges? To leverage the Pareto Principle, the team decided to:

In interviews with a subset of prospects, they were looking for insights into their hopes and dreams, pains and fears, and barriers and uncertainties. They wanted to extract the 20 percent of messaging that would deliver the greatest sales impact.

For example, during interviews with customers about HubSpot’s Sidekick for Business, a recurring theme they heard from prospects was: “I want to work less, make more. How can I spend less time selling and make the same (or more) money? I want to be as productive as possible so I can spend less time working and more time having fun.”

HubSpot used their customers’ own words to create a marketing campaign that applied the words they used, such as on this landing page headline — “Close More Deals with Less Work”:

The Zeigarnik Effect is the tendency to feel psychologically uncomfortable or experience intrusive thoughts about something that was started but left unfinished. An incomplete task fires up our automatic system, which signals the conscious mind to create a strong motivation to complete the action. It builds tension and keeps us hooked to see what happens. Thoughts about the goal will keep popping up in an effort to remind the brain to finish the goal.

How HubSpot Applied the Zeigarnik Effect

The marketing team came up with an idea to write emails without giving away the ending. Then it ran a Zeigarnik effect-inspired A/B email test to see which email performed best — the email that included the ending of the story or the one that forced readers to click through to get the conclusion.

Here are two versions of an email about Sidekick titled: “What Warren Buffet Taught Me About Setting Goals” — the email on the right gives away the ending: 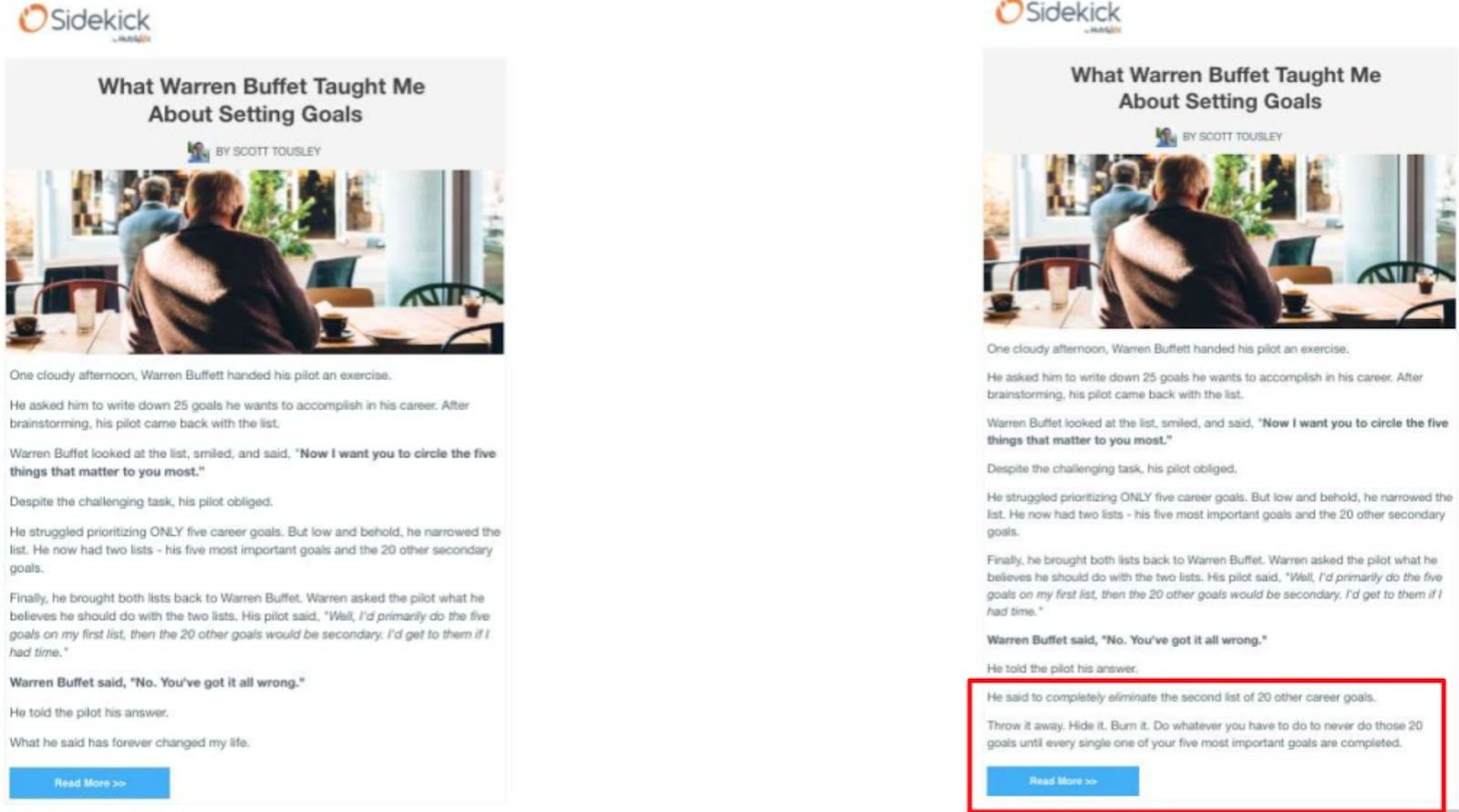 Psychological Principle 3 — Fear Of Missing Out (aka FOMO)

Fear of missing out is a pervasive apprehension that others might be engaged in more rewarding experiences than you are. It actually reaches back to our primitive survival instincts, when not being “in the know” could mean the difference between life and death, such as when a new food source was found. In our modern world, our ancient survival instincts are being overstimulated by social media, with its 24-hour access to reporting what everyone else is doing. Our amygdala is constantly being triggered to recognize that we’re being left out of something important.

To leverage the power of FOMO in its offers, HubSpot interjected messaging that limited participation in one of its new initiatives — only allowing the first 50 respondents to participate in a private beta product launch. The messaging encouraged them to take action now by applying urgency with a limited-time offer. 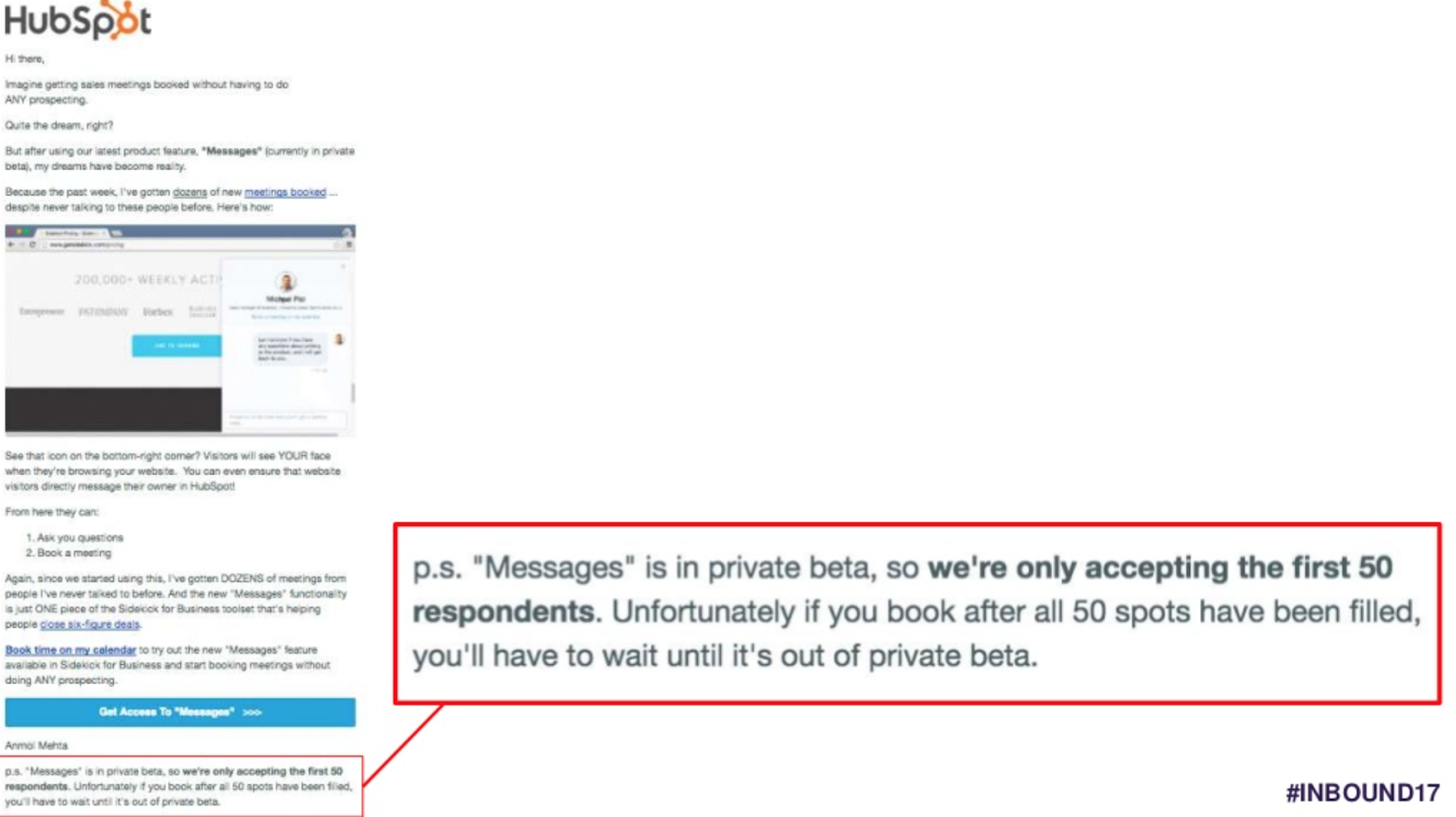 The Liking Principle says we’re more influenced by people and products we like. There are several dimensions of liking that are relevant to leveraging this rule including:

How HubSpot Applied the Liking Principle

HubSpot created an email that used featured basketball player, Stephen Curry, someone the majority of their target audience was likely to like. 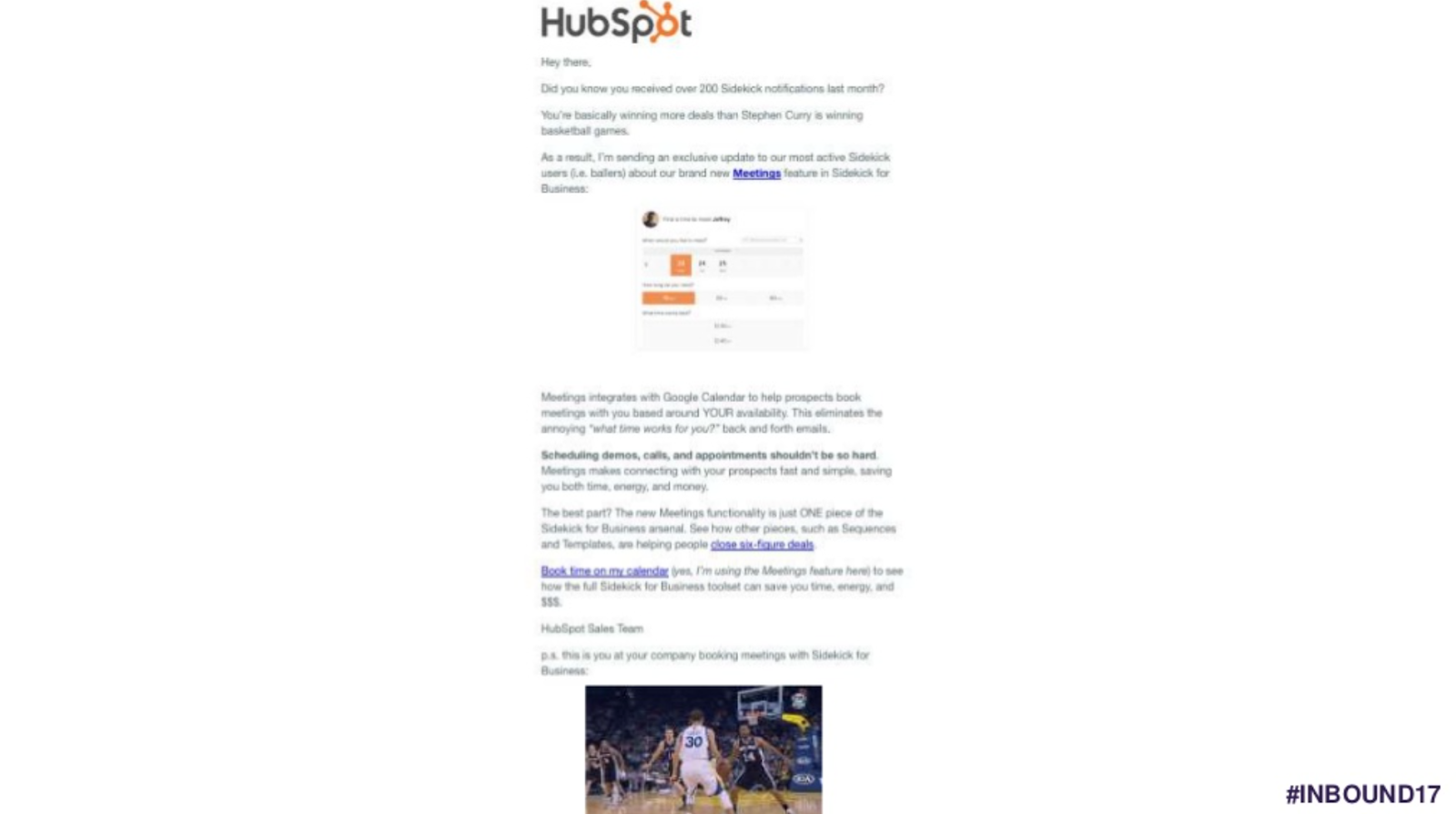 The Isolation Effect refers to the phenomenon whereby people recall something that stands out in a group and afford it more value than its peers. For example, events that are incongruent with their prevailing context are usually well remembered.

How HubSpot Applied the Isolation Effect

HubSpot hired a creative writer to create a wide variety of unique sales emails, hoping that one or more would stand out for the majority of the individuals within its target audience — such as these four examples: 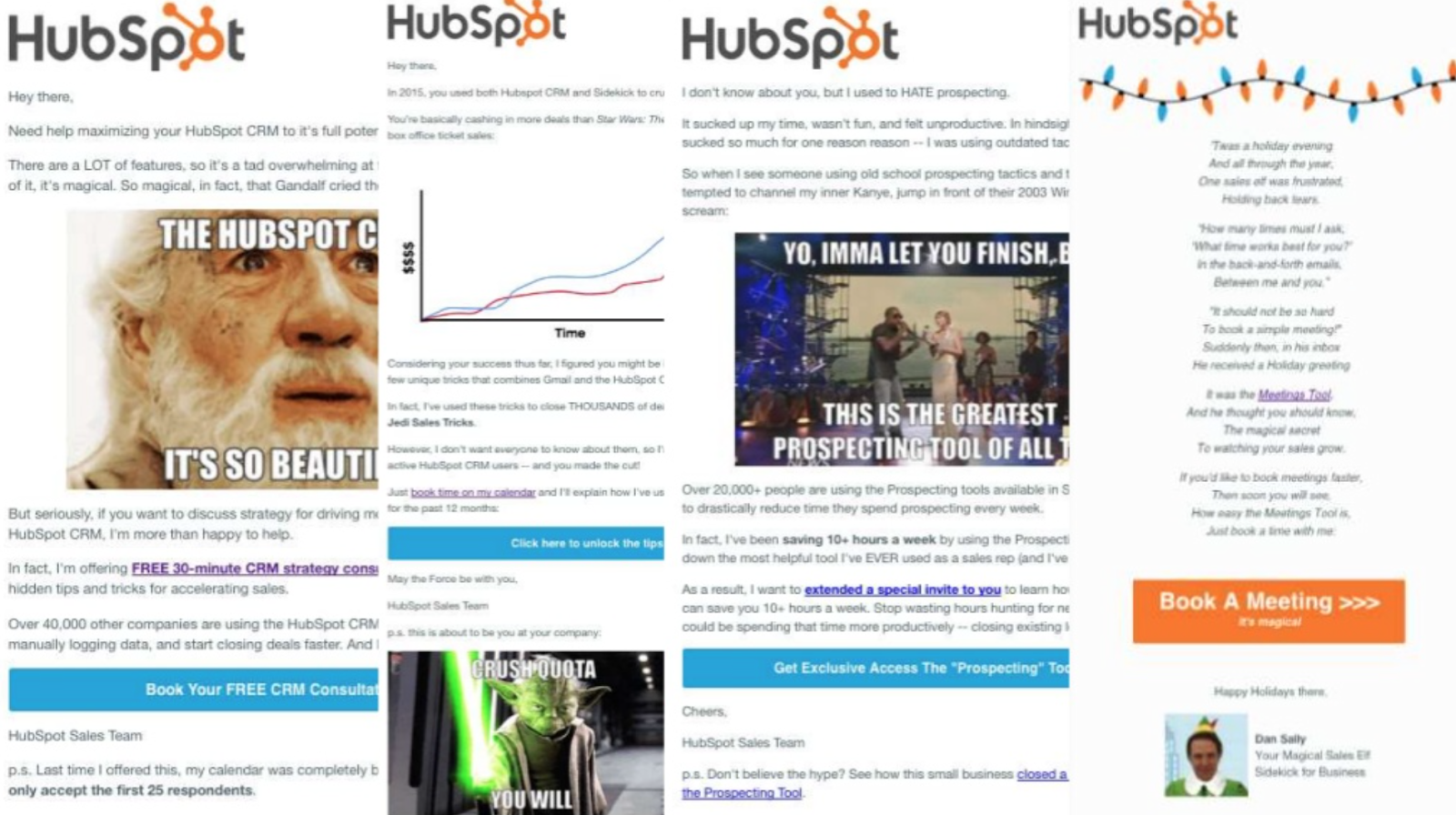 It’s getting harder and harder to break through the noise to capture today’s customers’ attention in our saturated marketing world and achieve the conversions we need to succeed. The HubSpot sales team found several ways to stand out, get people to like them and inspire their target audience to take action using scientifically proven concepts. As a result, they successfully achieved their goal of turning more leads into customers.

What new sales enablement ideas can you leverage to create fresh content that moves your marketing and sales needle?