How One Healthcare Blog Grew to 1 Million Monthly Readers

Two years ago, Spectrum Health Beat was a startup healthcare blog known mostly to its employees.

Since then, it has grown to reach more than 1 million monthly readers worldwide in all but seven countries (and one of the holdouts is North Korea).

Managing the blog is a team effort led by Cheryl Welch, a longtime reporter and editor who relied on her journalistic instincts to establish it as a trusted news source for Spectrum Health in Michigan and beyond.

I spoke with Cheryl when the site first launched in June 2015 and caught up with her again to talk about what’s behind its explosive growth.

She offers sound advice for anyone trying to expand their blog’s reach, particularly in the healthcare field. Here’s how Cheryl and the Health Beat team did it. 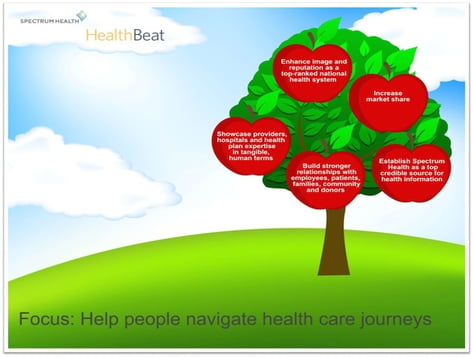 There’s a whiteboard drawing of a large apple tree sprouting fruit in the Health Beat room. The drawing reminds the team and others of the blog’s mission: To help people on their health care journeys.

“As long as our focus stays on that mission, then the fruits of our labor naturally form,” Cheryl said. “Those are mindshare, market share, brand loyalty, brand reputation.”

Having a clearly stated mission keeps the team on track and ensures every project they take on aligns with that focus. Anyone involved in creating content that’s linked to a corporation has likely had to balance requests from various departments and content that truly serves the reader. It can be easy to say "yes" to every request, especially when a blog is in its early stages. This can cause your blog to become more about you and your organization than about your readers—and your readers will notice.

Health Beat is certainly the soft sell of Spectrum Health. The articles include calls-to-action at the bottom of each post, and hyperlinks to physician profiles and program websites as references naturally appear in the posts.

“We are committed to telling real stories about real people going through real struggles,” Cheryl said. “This is consumer-oriented content marketing, and our engagement analytics show this approach works. For instance, readers [on average] spend up to 22 minutes on some of our stories. That’s an incredible amount of time.” 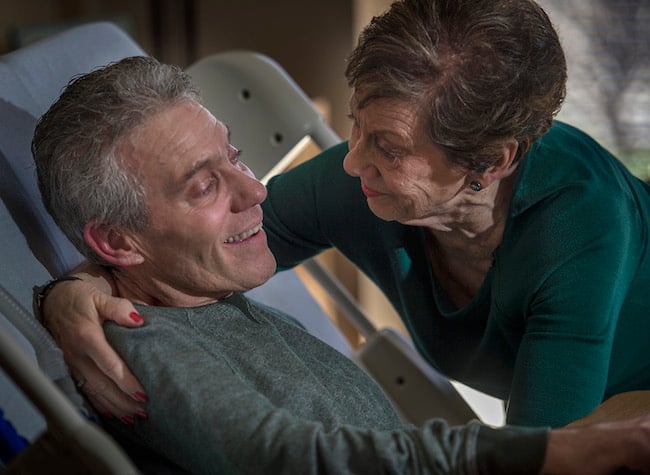 Dealing with matters of life and death is both inspiring and heartbreaking. It’s uncomfortable. It’s what the Spectrum Health team does each day, and Health Beat doesn’t shy away from it.

They are committed to telling authentic patient stories, even if they don’t always end in what would traditionally be considered a good outcome.

For two years, the five-person Health Beat team chronicled the journey of Todd Alward, a truck driver diagnosed with ALS. Slowly and painfully, the disease robbed Todd of his muscle control and breathing, relegating him to a hospice home bed. A few weeks ago, not long after his 59th birthday, Todd made the decision to stop taking his medication and relying on machines that helped him breathe.

But Todd had hope his death wasn’t the end—just the beginning of another journey. And Health Beat was there to share his story right up to its final chapter.

The story has inspired thousands of others, including those who shared their own personal accounts in the comments.

Although stories like these aren’t always easy to tell, Health Beat readers have come to expect them. They see the site as a source of inspiration as well as information.

Dare to Go Where Your Readers Can’t 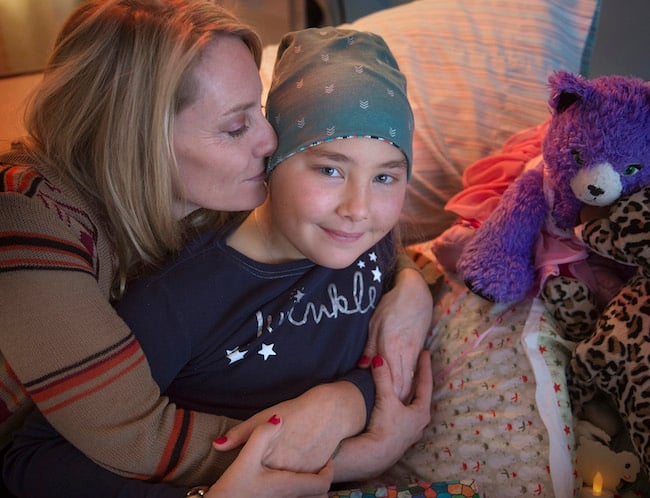 Health Beat also chronicled the story of Lilly Vanden Bosch, a 10-year-old girl with a rare autoimmune disorder known as aplastic anemia. The team has shared her journey since November 2015, including following her to radiation treatments and even when she received a bone marrow transplant. They were there as her family rejoiced after the transplant and also there through the uncertainty as she fought a potentially deadly respiratory virus.

The team captured moments of laughter and tears; moments that are both mundane and extraordinary.

Because Health Beat’s writers and photographers gained the trust of families and the trust of their physicians, they are able to go where most traditional media cannot. Health Beat is there—in operating rooms and at the moments that take our breath away.

Partly because of this access, and partly because of the quality of the brand journalism being produced by Health Beat, the Spectrum Health communications team regularly receives requests from the media to re-publish Health Beat’s stories, photos and videos. These stories have been featured in local news outlets as well as international publications, including the UK Daily Mail and People Magazine. 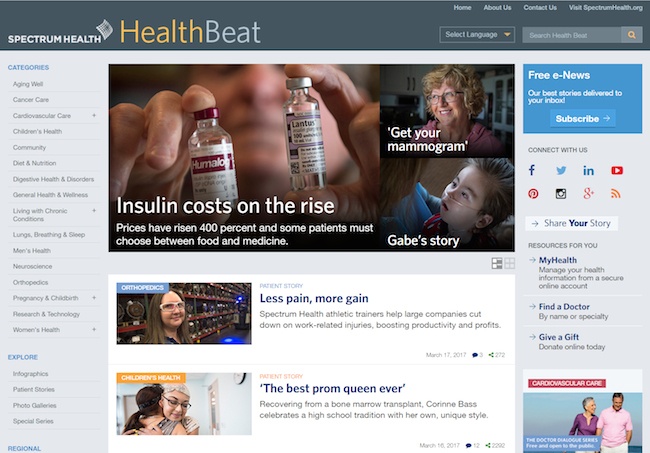 How often should you publish to your blog? It all depends on your goals and how often you want to be found. Research from HubSpot found companies that publish 16 or more posts per month get 3.5 times more traffic than companies that publish four or fewer times a month. For B2C clients, the impact is even more significant.

For Health Beat, publishing frequency directly aligns with the goal to be a leading resource for healthcare news and empowers patients to take ownership of their health.

They average three posts per day and plan their editorial calendar several months ahead of time, adjusting as needed. To supplement the work of their core team, they also lean on a network of freelance writers who work with them remotely. 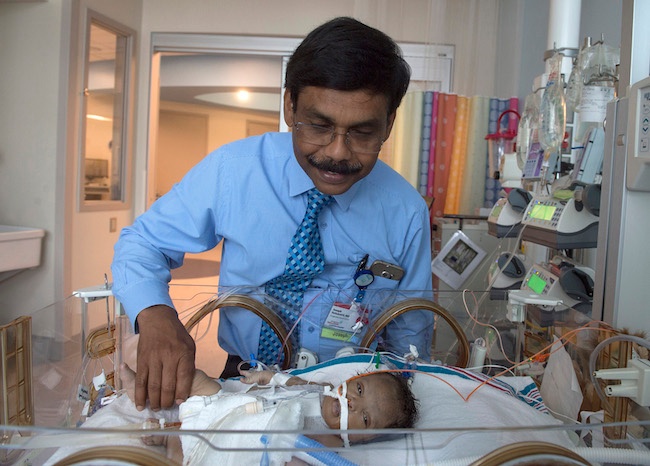 Health Beat made a concerted effort to promote its stories, starting with developing a broad external consumer base. The team focused on developing fantastic content for the site, then sharing that content through weekly and monthly emails, social media and community events.

Once it found success in this realm, Health Beat turned its focus inward, to develop brand ambassadors within the Spectrum Health system by extending its reach to the hospital system’s 25,000 employees. This internal initiative started with an introductory email to employees to let them know they would begin receiving Health Beat’s stories in their inbox. Although employees are free to unsubscribe at any time, only one employee has. New employees are also notified about the blog as part of the orientation process.

Employees frequently share Health Beat’s stories and tell Cheryl they look forward to reading them every week. It helps them feel more connected to their patients and the work their colleagues are doing. Readers also recognize Spectrum physicians who live and work in their community.

“[Physicians] would go out to their mailbox and their neighbor would say, ‘Hey! You're a star. You were in my Facebook feed the other day,'” Cheryl said. “Or they're at church and someone comes up to them and says, ‘The work you're doing is amazing. I just want to thank you. You're a godsend.’ Our providers get so much positive acclaim from participating in these stories.”

Health Beat now enjoys more than 1.1 million unique visitors to its site, and this grows daily. 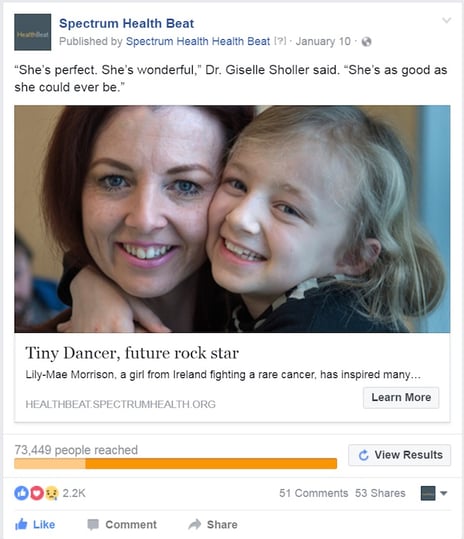 Health Beat posts were initially promoted on the corporate Spectrum Health Facebook page, but the team decided it needed to have its own presence.

In a relatively short time, the Health Beat Facebook page has built up a following of more than 33,000 fans.

Because the hospital network treats patients from around the world, Health Beat boosts posts strategically to specific regions where there is the most interest. For instance, the story of “Tiny Dancer” Lily-Mae Morrison, an 8-year-old girl whose story gained international attention and even inspired a meeting with Elton John, was promoted to her hometown of Claregalway, Ireland.

Health Beat also promotes its content on its own Twitter, Instagram, Google+ and YouTube feeds as well as its Spectrum Health partner social media pages. Health Beat’s stories are regularly the top posts shared on social for Spectrum Health, continually showing the value of brand journalism to the health system as a whole. 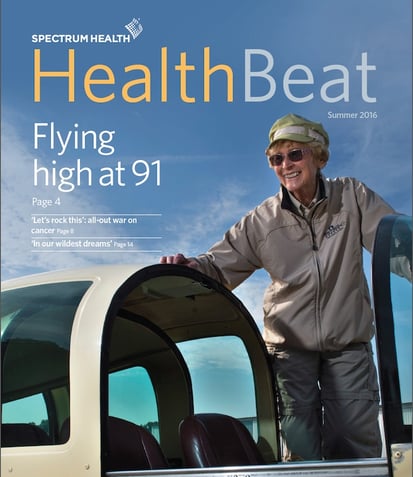 To broaden its reach, the Health Beat team recognized it needed to branch out beyond the digital realm. It now produces a print Health Beat magazine mailed directly to specific areas to meet the hospital system’s business goals. The most recent edition showcases Spectrum Health’s efforts to reduce diabetes and heart disease in the Hispanic community, which recently earned the nonprofit system the Foster G. McGaw Prize for excellence in community service.

Health Beat photos and other assets are used in both internal and external presentations, in digital displays and in advertising campaigns for the hospital, as well as in hospital waiting rooms and at local events.

Producing its own news daily has enhanced Spectrum Health's relationship with the media. In addition to writing press releases to pitch stories, the public relations team now often works with the Health Beat team to cover stories, giving them a complete package of assets to share with the media. The PR team has seen greater success in getting media pickup by doing so.

Taking the Next Step

As the success of Health Beat illustrates, it is possible for a blog to have continued growth if your team is committed to serving your readers with helpful, authentic content, publishing regularly and promoting it relentlessly.

Of course, it requires taking a team approach and dedicating enough resources to make it happen. If your organization isn’t willing to go all in, it will be more difficult to make an impact as significant as this.

If you have the vision and the desire but lack the resources, consider working with a digital marketing agency or a team of freelancers who can take on some of the workload. Agency writers or freelancers can interview subject matter experts and draft posts for them to approve, making it easier for busy professionals to contribute.

However, there’s no substitute for having an on-site champion who is invested in your organization and committed to leading the charge across your organization. Even if it’s just one person (for now), success tends to have a snowball effect.

“The more success we show, the more our leadership and providers are appreciative of what we're doing,” Cheryl said. “They see the value of what we're doing and they give us the resources that we need to continue to do the good work that supports our healthcare system as a whole. We’re truly making a difference, and isn’t that what we all want to do?”