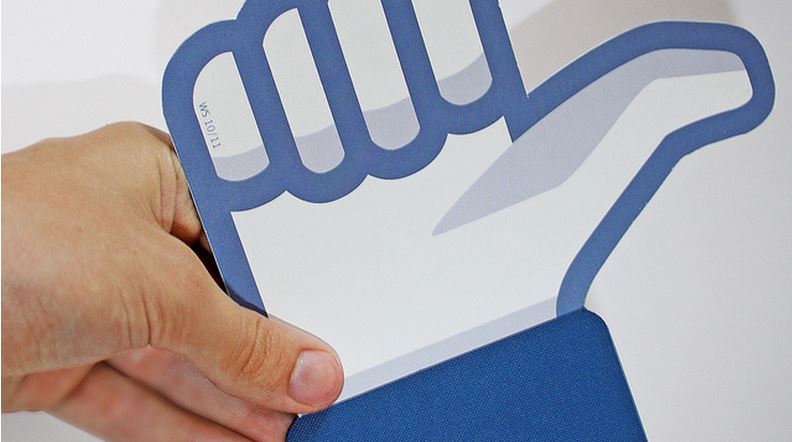 Last month, Facebook once again slashed organic reach for brand pages to what AdWeek (via ValleyWag) is estimating to be a measly 1 to 2 percent. That’s right, all those Likes on your page, well, you’re only going to reach a small fraction of them if you’re not spending money on Facebook advertising. For brands that spent thousands of dollars to gain Likes through Facebook’s ad platform, it’s another blow, one that really hurts because now to reach those Likes they legitimately bought, they’ll have to pay for it.

Not even a week later, a Facebook communications director responded to a brand’s blog post about why it was shutting down its Business Page (and subsequently did) with a rather dismissive status update. Check it out:

It’s a bit of a smack in the face given the years marketers have spent trying to build viable communities that are now unreachable. Still, Facebook has made one thing abundantly clear: Brands don’t matter to them.

When I say brand pages don’t matter to Facebook, I mean this: Your content isn’t as valuable to users as you think it is. You would think at this point in the game, everyone would consider shutting down their Facebook Business Pages. After all, a quick scan of my newsfeed indicates that Facebook only seems to care about Buzzfeed quizzes and Upworthy videos shared by my friends and not much else. But looking at some of the Facebook pages we work with, many of them are reaching more of their audiences than ever and driving a considerable amount of traffic to their web sites. Why? They’re advertising.

Facebook’s apathy isn’t necessarily grounded in the idea that brands aren’t necessary parts of the ecosystem. Obviously the money from their ad platform keeps the lights on. But as one Facebook source put it when talking to CNET, “Over the past few months, we have been having conversations with clients about declining organic distribution in News Feed. This is largely due to more competition driven by more sharing.”

Advertising is necessary to beat the competition, but that’s only half of it. The content you share has to be worth the user’s attention, as well. This is why Facebook no longer allows brands to automatically promote every new post via the ad platform. And it’s also why our B2C clients are often more successful than B2B clients.

B2B brands should unquestionably still be on Facebook, but the way they manage pages needs an overhaul. While B2B brands often focus on blogs and images that are educational, unlike their B2C counterparts, they’re hardly entertaining. It’s all head and no heart. Successful B2B brands, however, can get right to the core of what makes their fans tick.

Check out this update from GE, which is the page’s most successful update in terms of Likes and Shares in the last two months: 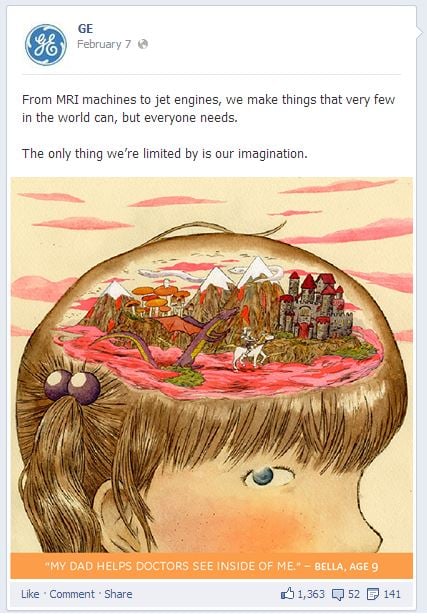 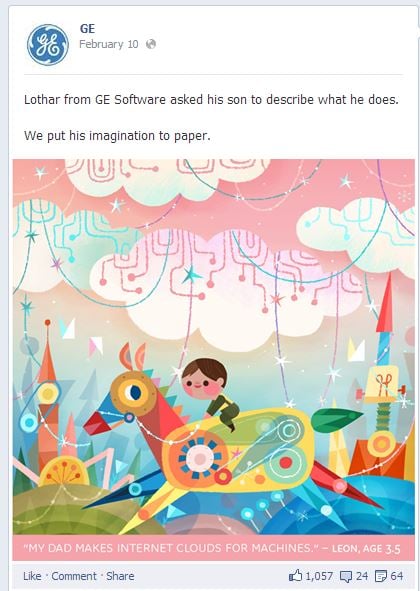 Unlike LinkedIn or Twitter, where educational content is king, emotional branding is what really works on Facebook. It is the network you go to for baby pictures, wedding photos and other updates on major life events, after all. It’s a place that’s inherently in tune with what it means to be human, including those quizzes. And you need to understand the emotional needs of users on Facebook more so than their business needs.

Is this all to say that simply being in touch with the more sensitive side of your audience will make your Business Page a success in a world of declining organic reach? Not at all. But if you’re paying for reach, you should pay to promote content your audience actually wants to see in the news feed. For that, you gotta have heart.