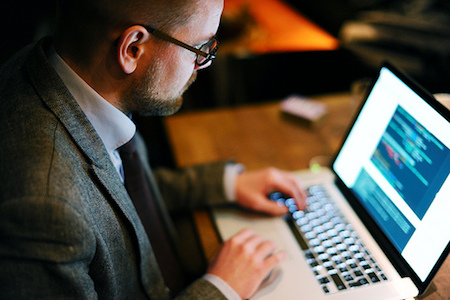 How in the world will websites change in 2014? Kuno Creative Front-End Developer Jesse Pennington tackled that question earlier this month with his blog “The State of Websites in 2014: Stats & Facts You Need to Know.” Jesse’s blog certainly had me thinking more about the future of websites, but it also got me thinking about the people behind websites: web developers.

Continuing our series about the future of inbound marketing, I sat down with Jesse to discuss the changing role of web developers, as well as what changes he believes they should anticipate as the year progresses. Here’s what he had to say:

Developers now have more of a role in initial strategy meetings. That’s something we’ve noticed helps a lot with different clients, especially with responsive design. Sometimes in the past, we’d go to build a finished design, and we’d realize something in the layout didn’t quite make sense or we’d see a better way to approach something. But because we weren’t involved from the beginning, things like that weren’t talked through. Yes, we’re developers, but we’re in marketing, so it’s important to be involved from start to finish.

In inbound marketing, we’re always talking how sales and marketing need to align. I think web development needs to align with marketing. If I don’t know and understand the rationale behind why I’m building certain pages or forms, sure I could build them, but they won’t be as effective. I have to get on the same page as the technologists, designers and content writers.

That understanding can be valuable to a company because now you’re taking your skills, and you’re making changes that will likely generate revenue for the company.

Also, personalization is becoming a large part of [inbound marketing]. Everyone, including developers, needs to think about the customer from start to finish. Developers need to think how they’re going to create sections and make it so websites are more tailored to individuals who have already filled out forms.

What are your top predictions for web development in 2014? What do web developers need to know to be successful?

2014 is the year responsive design becomes a standard, not just an option. There are countless resources available discussing how mobile usage is surpassing desktop usage and how there’s an influx of tablets. There are even studies suggesting people in the process of shopping, let’s say for a pair of shoes, will look up the price on their mobile phones, then look at other options on their tablets, and then buy them on their desktops later. They’re doing cross-platform searches for a single item. As a web developer, you need to be an expert in responsive design.

Adoption of HTML5 is something to watch this year. A little background: At the end of this year, W3C is supposed to make a standard recommendation of HTML5. Should this happen, a lot of web developers are going to have to catch up because, to this point, I think a lot of people have just been using HTML5 as a buzzword—they don’t actually know how to do anything with it.

And the last thing that stands out to me is smart content for personalization. It will be interesting to see whether people respond to smart content positively or if they think it's creepy. As marketers, we believe smart content will help people make better decisions. Will they love that a website reads, “Jesse, welcome back!” when they come back to a website, or will they think, “Wow, that’s weird. I don’t like that.” We don’t have an answer yet. That’s something to watch this year.

Responsive web design, HTML5 and smart content are the three things web developers need to be on top of this year.

What resources do you think will be most helpful for web development in 2014?

We're big fans of Smashing Magazine at Kuno. We just bought the new Smashing Book “New Perspectives on Web Design,” and we love that thing. Resources like that help us refine our process and keep up with trends.

I also like to read Forbes Business Technology. As a web developer, you have to understand what’s going on in the greater business world. People running businesses make the decisions on what kind of development work you’ll be doing. Looking at the big picture always helps.

We’ll be tackling trends and predictions in two more inbound marketing disciplines before the month closes. Subscribe to the Brand & Capture blog now so you don’t miss these exclusive Q&A discussions with some of the brightest minds in inbound marketing!

What changes do you predict for web developers in 2014? Share your thoughts in the comments below!