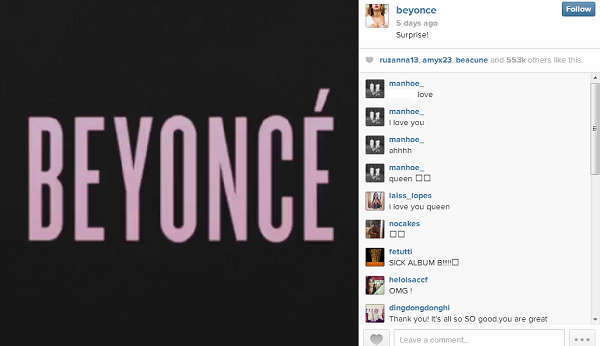 How Beyoncé Schooled You and Me in Content Marketing

Beyoncé made music history this past Friday when she dropped her self-titled fifth album with literally one word: “Surprise!” And this word was not uttered via the usual channels musicians have used for releasing albums. She posted it. Herself. On Instagram.

Here’s my one word: Amazing!

While Queen B is on track to have her best release week ever, perhaps more importantly, she is solidifying herself as a music legend, not only for her talent and music, but for her business sense, too.

One can only hope to be a fraction as cool as Beyoncé, but there are several lessons here you and I, as content marketers, should take into consideration. Check out how Beyoncé schooled us all.

While we may not always have all the resources at our disposal that Beyoncé does, look at what she utilized during this stunt: videos, Instagram, a press release and her brain. It doesn’t take much to rule—just a little creativity and rule breaking. That's why we love you, B!

What content marketing lessons have you learned from your favorite celebrities? Share your thoughts in the comments!

Brianne Carlon Rush is Content Director at Kuno Creative. She uses her content marketing powers to help Kuno and its clients build their brands. You can connect with her on Twitter, LinkedIn and Google.

After developing the Kuno Creative content marketing department and growing it by 500%, Brianne has expanded her role to help grow the inbound marketing agency in size, revenue and resources. She now focuses on sales and marketing alignment; employee recruiting, hiring and development; and communication strategies, while still dedicating time to client strategy and Kuno’s marketing efforts.
MORE FROM THIS AUTHOR >