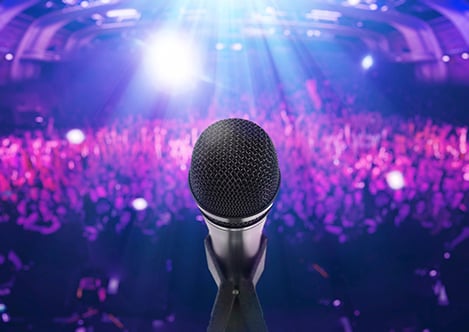 Your customers are posting, commenting and tweeting about your brand online—there’s no question about it. As a result, more companies are beginning to understand the importance of listening to what their audiences are saying and engaging them. Some of them have even built social media into their overall marketing strategy.

I’m always impressed by those brands willing to participate in active discussions on social channels, or others that are brave enough to resolve a customer service issue in the social media spotlight. But those who truly impress have turned their social channels into feeds for creativity, storytelling and excitement for what they are sharing online.

Below we’ve compiled a list of unique ways some of the biggest brands are interacting with their audiences on social platforms.

Based on its Twitter feed, it’s clear AT&T loves hashtags and creating buzz with shareable, user-generated content. One of the current AT&T campaigns called #BeTheFan is inspired by ESPN College GameDay. Every week, AT&T uploads a new football fan challenge to the #BeTheFan website. Fans have to use their smartphones to snap a photo of them carrying out the specific challenge of the week (last week fans had to submit a photo of their game day fan-wear). Then users post the image to Twitter, Instagram or Vine and tag it with #BeTheFan.

As a brand, CEO or industry thought leader, it can be difficult cram a message into 140 characters or less. Crafting the perfect tweet takes time and patience, which can lead to content delays and frustrating experiences for audiences and the person behind the tweet. But using Twitter as a medium for Q&A removes the formality and structure of a traditional interview and forces direct and concise questions and answers.

In December 2011, Tom Petty met up with his fans on Twitter for a live chat session. In 90 minutes, Petty answered more than 100 fan questions on topics ranging from musical gear to what he likes to eat for dinner. 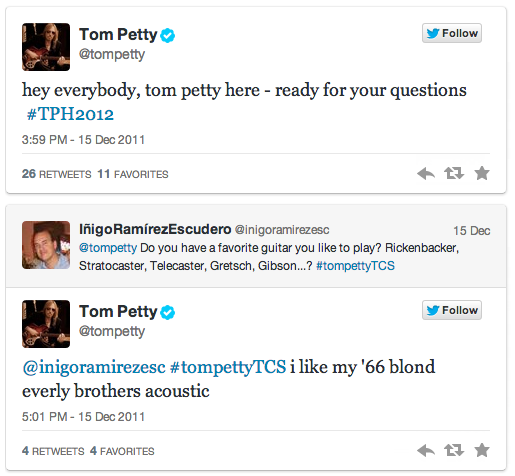 Customers who follow and engage with your brand on social channels are some of your biggest fans. For those who frequently share your content or participate in discussions about your brand, a little recognition can go a long way.

Every week, Dunkin’ Donuts puts its fans front and center on its Facebook cover image. Customers show Dunkin’ how big of fans they are by submitting photos of themselves through the Fan of the Week Photo Gallery app on Dunkin’ Donuts’ Facebook page. The selected fan gets a Facebook shout out along with their image on the week’s cover photo and on the Dunkin’ Donuts digital billboard in Times Square.

Have you ever connected with a story so much that when it was finally over you felt lost, as if it actually were “the end of an era?” That was my reaction when the show “Friends” finally left the air. Almost 10 years later, I still catch myself watching re-runs on television or popping in a DVD from one of the 10 seasons. But now, thanks to Warner Bros. Entertainment and a huge community of “Friends” enthusiasts, there’s a Facebook page full of show photos and commentary, shared in the same tone and voice as our favorite “Friends” characters.

Much like with the show “Friends,” Warner Bros. has created a fan page for every Warner Bros. movie, television show and video game so fans can immerse themselves amongst some of their favorite personalities in entertainment. 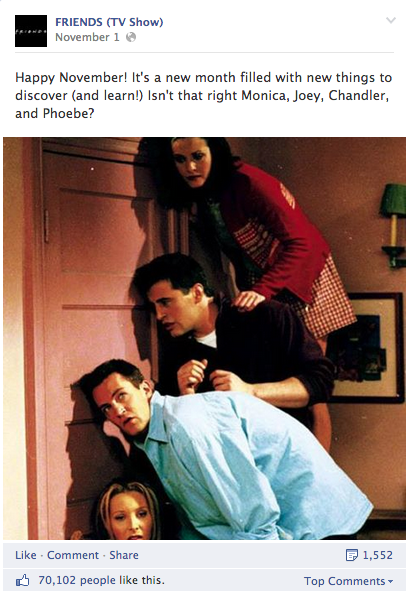 For technology and consumer goods, social media channels can be hotspots for reviews, technical questions, customer issues and more. If your most active users have something to say about your product, you’ll know it.

Depending on your product or service, your brand may have an opportunity to engage your audience through an idea exchange, or a place where customers can submit ideas, collaborate on their development and vote for the ones they like best. With this kind of forum, your brand is engaging users in a collaborative space where they can brainstorm about the future and potential of your product.

In 2010, Ford Motor Company launched “Your Ideas” where consumers can submit, share, rate and review their ideas for Ford’s automotive technologies. Since the launch, Ford has gathered more than 3,000 ideas for future automotive features, enhancements and improvements—an excellent example of how a company is “turning to the social Web as an innovative way of generating new vehicle feature ideas that customers really want and value,” stated Mark Fields, Chief Operating Office of Ford Motor Company. 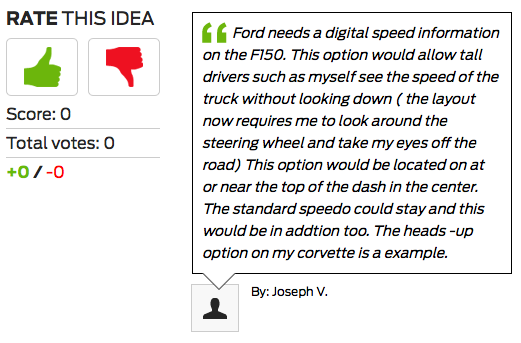 You do not have to be a top brand with an enormous marketing budget to start engaging your audience. But before you launch a hashtag campaign or an open call for your Facebook fan of the week, do a little digging into your online audience:

What tips do you have for developing a social media engagement strategy? Share them in the comments below!

Jennifer King is a Brand Journalist with Kuno Creative, where she applies her skills as a journalist to develop engaging content for B2B clients. Her work has appeared in online publications such as Lifehacker, Forbes and Great Place to Work. Connect with her on LinkedIn and Twitter.