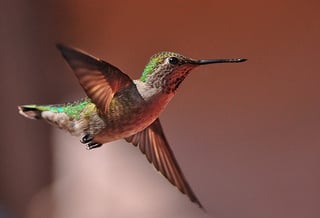 Hummingbird & Other Updates Show Google is Gearing Up

Would it surprise anyone if I said Google has been changing things up? Probably not. Google is a company that ‘tinkers’ with its prized algorithm hundreds of times a year. Recently, however, there has been more action than usual spanning a wide gamut of Google-sphere products and services. I believe the underlying rationale is beyond the simple improvement of products, but rather the seeding of yet uncultivated Google Glasses ground. Let me explain what I mean:

Back in September, Google released Hummingbird into the world 'wild' web. Hummingbird has been described by Google not as tweaks to the current 'engine' of Google search (like Panda and Penguin), but rather a complete new engine altogether...sort of. In reality, Hummingbird is a new engine pieced together from existing current pieces and new technology—a cut and paste craft job that potentially impacts 90 percent of all online searches done today.

With Hummingbird, Google's focus is on improving search results (and staying ahead of the competition). The company is achieving this in a number of ways, most explicitly through conversational/contextual search. Hummingbird can now better handle more natural (though inherently more complex) queries searchers are using; it better understands the relationship between searched items and how to present this data back to the user in digestible portions. Interestingly, it presents this information on the SERP page, potentially poaching site visitors from sites that could have answered the question.

It can also string multiple queries together, a form of more natural speech queries, and maintain a context (i.e. - "How far is it between Cleveland and New York?' would get a standard result). If followed up by "How long would it take to drive?," Google Hummingbird remembers the previous question and answers appropriately. Pretty nifty considering this will reduce the amount of typing the mobile-connected population will need to do.

Imagine how useful for Google Glasses it will be for users to be able to converse with Google search, ask questions in a more natural query structure and have Google maintain the context of the conversion throughout. This alone would raise Google Glasses functionality beyond that of other wearable tech companies, while at the same time create a point of comparison to Siri.

In addition to updating its search algorithm last month, Google has also decided to roll out encrypted search for non-logged-in users of Chrome. The result of this is the slow death of search terms being visible via Analytics. With 43 percent of the browser market and 67 percent of the search market this is no minor issue. The site (Not Provided) Count predicts all of Google search traffic will be "not provided" by November of this year. (Yikes!)

Of course, there are caveats to most things, and in this case, Google is allowing search data to be seen in Adwords when its connected with the Webmaster Tools account, but only for a 90 day period. In honor of the quote "necessity is the mother of all invention" search experts around the world be devising new ways to get old data. Marc Purtell at SEJ came up with seven such strategies.

Many are saying Google's move for encrypted search is in response to NSA surveillance and the related public backlash it created. I disagree, as while we may not have access to data important to our sites, Google still does, and by extension, so will the NSA. Personally, I believe this to increase consumer confidence in using Google products/services without the spectre of tracking or oversight. This is an important play to make when convincing a public to not only bring technology with you (i.e. - smartphones, tablets, etc.), but with Google Glasses to be constantly interacting with it.

In the background in August, Google released new Google Voice search commands that allow users to verbally interact with the contents of their Google profiles and phones. While these commands are not essentially new (Google Now users have had them for a while), they are now outside of the app and built in Google Voice search. As Megan Marrs over at Wordstream said: “If Google Voice Search is collecting voice data, it will likely be a huge aid in furthering Google Glass. Google Glass relies almost exclusively on voice search, so Google wants to understand your commands better than a dog begging for treats.”

Google is gearing up. By making it even easier to interact with Google via voice search, by instigating fundamental search algorithm changes with Hummingbird and attempting to regain consumer confidence with encrypted search, I can only believe this will be the framework upon which much bigger, broader changes will take place in the near future to aid the adoption and growth of Google Glasses. What do you think?

Patrick McCaffrey is a marketing technologist with Kuno Creative. Outside of work, he's typically reading, drawing or cleaning up his son's most recent mess. If you want to talk digital marketing, marketing strategy or simply what is it like to be an Irishman in Cleveland, connect with him on LinkedIn and/or Twitter.