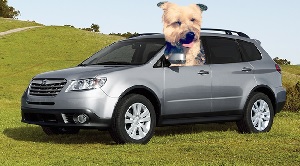 Every Saturday, my four-legged canine Grady and I visit one of the local metro parks. We don’t even get far into our walk before we hear our first, “Awe, what a cute dog!” And without fail, Grady comes home with a bigger ego than he started with.

It's the same reaction I have as a Labrador puppy runs across the television screen chasing toilet paper. It’s how Bullseye, Target’s mascot, got me in the mood for the 2012 holiday season with his BIG commercial, towering over a city of shoppers to unveil a pre-holiday tease, “The holidays are coming, and they're going to be big."

Dogs are everywhere—from commercials and websites to magazine advertisements and direct mail pieces. So what is it that makes these furry friends so popular amongst marketers? Here are three reasons marketing loves dogs:

Take the carmaker, Subaru and its “Dog Tested. Dog Approved.” Campaign. The campaign, which re-launched in 2012, features dog breeds driving Subaru vehicles to and from their favorite weekend destinations: a campground, a beach and a ski resort in separate television commercials. While marketers know not every brand will see success using dogs as part of their advertising, Subaru had its buyer personas defined enough to make this campaign successful.

From research conducted, the company found its drivers were two times more likely than the average car owner to have a pet. In fact, seven out of ten Subaru drivers have a pet. The company took the survey a step further by asking buyers what activities they often engage in and found Subaru owners are more likely to participate in skiing, camping, boating and other sporting activities. To reflect these passions, those activities are depicted in the Dog Tested commercials.

Not only has Subaru appealed to dog owner and outdoor enthusiasts on the road, but off the road, too. You can now visit the Subaru Facebook app to upload a picture of your dog driving a Subaru of choice. Subaru is right: Not only does Grady like the occasional outdoor adventure, he likes to be in the driver’s seat while getting there. (See him at the wheel in the photo above!)

We’ve all seen the Beggin’ Strips commercials from the point of view of the dog hungry over the smell of Beggin’ Strips so fresh, they have to be real bacon. Turns out, the Beggin’ Strips dog, Hamlet, has a voice on social media, too! With more than one million Facebook fans, Beggin’ Strips receives hundreds of new likes, comments and shares with creative posts like, “In honor of Lady Gaga’s birthday, I’m wearing a bacon tuxedo. So what if I found out it was her birthday three hours after I got dressed?!”

Beggin’ Strips has even embarked on running Facebook contests to increase engagement with fans. Have a photo of your pet dressed up for Halloween? Submit it on Facebook or Twitter with the hashtag #BegginHalloween for a chance to see your furry friend show up in the Beggin’ Strips Facebook cover photo.

With consistent giveaways, user-submitted photos and catchy content from the company’s talking dog, Beggin’ Strips has the recipe for social media success!

It’s those “awe” moments that really tug at the heartstrings of dog lovers anytime a dog shows up in a marketing piece. Yet, it’s more than the “puppy eyes.” Simply put, dog’s are man’s best friend. We trust them. And that’s why when Traveler’s Insurance was looking for the perfect marketing aide for its branding campaign, the company chose a long-haired mutt named Chopper.

In his famous commercial, Chopper spent many restless nights troubled over where to hide his bone—even deciding a bank safe wouldn’t make the cut. Inevitably, Chopper chose to secure his bone with Traveler’s. The commercial sent us a reminder that the stress you see your dog go through to hide his bone is the same you go through when choosing an insurance company. Traveler's want you to “leave nothing to chance,” as the company slogan states.

Why do you think marketing loves dogs? Add your insight in the comments!

As a senior consultant at Kuno Creative, Jenny Traster puts the pieces of the inbound marketing puzzle together from content marketing to social media management. She enjoys writing and learning about current social media trends. Connect with her on Twitter and LinkedIn.