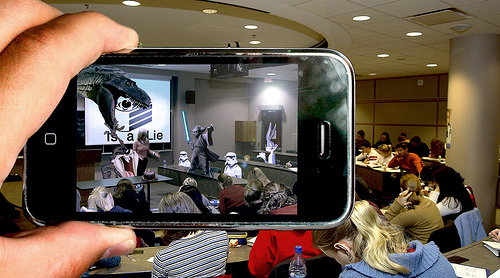 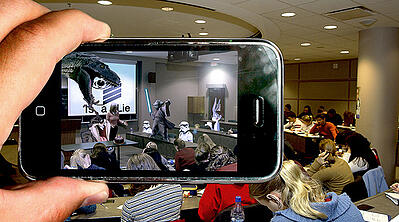 If you’re reading this blog post, you already know just how much technology has changed marketing and advertising. During the Mad Men era, blogs didn’t exist. Neither did Facebook, QR codes or the mobile web. Marketing and advertising were powered by the old channels of magazines, newspapers, radio, television, packaging and point-of-purchase displays. As technology continues to advance, we’re beginning to see it not only open entirely new channels for marketing, but give many of those older channels an overhaul.

I imagine many of you have at least heard of augmented reality, but just in case, let’s define it. According to How Stuff Works, “The basic idea of augmented reality is to superimpose graphics, audio and other sensory enhancements over a real-world environment in real time.”

Augmented Reality, or AR, is far from reaching its full potential, but it already has many applications from entertainment to education and gaming to major manufacturing operations. Given the work we do here at Kuno, we’re really excited for the possibilities in the marketing and advertising space.

While just at the tip of the iceberg, brands are using AR technology today and engaging with consumers in a whole new way. Here are some of my favorite examples you should check out:

If you’ve ever considered shopping at IKEA, it’s probably not a small undertaking. With few stores scattered across the US and shipping rates that practically mandate you schlep the stuff home yourself, it can be a lot of work only to discover that great entertainment unit looks terrible in your living room. IKEA has addressed this issue by creating an augmented experience in its new catalog, letting you actually see a piece of furniture in your home before buying it.

The interior of a car is no longer limited to the basic functions that control direction and speed. As more sophisticated technology is added to vehicles, there can be quite a learning curve to understand what every button does. Audi has changed the basic, often hard to understand owner’s manual and used augmented reality technology to make it quicker and easier to learn the features of your car.

In the running for what I would call the “best advertising use of augmented reality,” Cadillac gave the car-buying public a way to engage with the ATS in a way never seen before. Through a series of chalk drawings of beautiful scenes across the world, a user could use his or her mobile device to watch the vehicle navigate the road in each scene in a truly unforgettable way.

Your mother always told you not to play with your food, but it’s impossible to resist with the new augmented reality experience from Haagen Dazs. Aim your iOS device at a pint of HD ice cream and enjoy a serenade from a violinist.


Augmented Reality is letting brands connect and engage with consumers like never before, leading to higher retention rates. This means people who experience augmented reality are more likely to remember that experience.

It’s exciting to watch where this new technology will take us in the future, as it becomes more accessible and wearable technology like Google Glass is developed.

What great augmented reality experiences have you seen, and what do you think are the long-term marketing implications? Leave us a comment below!

With a decade of marketing experience, Meghan Sullivan is a Senior Consultant at Kuno Creative and is passionate about developing and executing inbound marketing strategies for her clients. When sheís not doing that, sheís probably curled up on the couchwith her dog and iPad, or exploring Clevelandís incredible food scene. Connect with Meghan on Twitter or LinkedIn.