Expanding Social Media Reach: How Far are You Willing to Go?

When Chipotle announced its “Adventurrito” promotion in honor of its 20-year anniversary, I immediately jumped on board. A chance to win free burritos for 20 years? Yes, please. Upon registering for the 20-day-long treasure hunt, I was prompted to follow the company on both Facebook and Twitter to receive hints for the puzzles I would be challenged to solve. Everything seemed legit enough.

How Far is Too Far?

After a stream of consciousness-like tweets, Chipotle finally tweeted, “Sorry all. We had a little problem with our account. But everything is back on track now! – Joe.” Some people were thoroughly confused while others caught on to the attention-seeking trick when the company didn’t bother removing the tweets in question.

The tweets were actually carefully constructed to help in the promotion of “Adventurrito.” On the day of the supposed hack, the puzzle had to do with Chipotle’s ingredients, which is why the tweets were about avocados, lime, salt and onions. 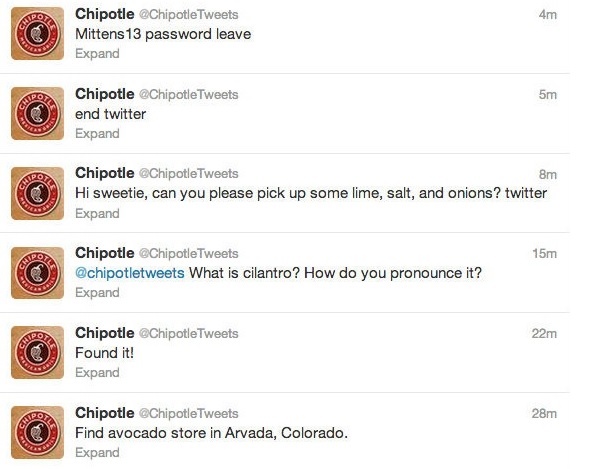 Chris Arnold, a Chipotle representative, told Mashable, “We thought that people would pay attention, that it would cut through people's attention and make them talk, and it did that.” The “hacked” tweets received about 12,000 retweets and added more than 4,000 new followers – quite the increase from its daily average of 250 new followers.

Chipotle’s little stunt was certainly harmless in the sense it wasn’t negatively aimed at anyone in particular. Arnold explained, “We wrote the tweets in a way that was careful and not mean-spirited… We wrote them in a way that was non-sensical, that allowed us to have some fun.” However, I can’t help but wonder if ploys like this will ultimately hurt a brand. Companies and brands are consistently tested to establish a trusting report with consumers through social media channels. Pranks can easily derail these efforts.

Back in February, MTV and BET took advantage of the social media trend after Burger King’s Twitter account was legitimately compromised. The two networks, both owned by Viacom, pretended to be hacked by each other in order to promote an upcoming show on BET called “What the Hack.” MTV ultimately tweeted, “We totally Catfish-ed you guys. Thanks for playing! <3 you, @BET. ;)”

The trick gained little positive attention, and Keith Trivitt, director of marketing and communications at MediaWhiz, stated “If a brand as famous as MTV has to resort to fake hacking its own Twitter account to gain the attention of its followers and, ostensibly, the public, then the state of social media marketing isn’t nearly as robust or mature as many thought.”

Personally, I don’t mind the ploys or tricks. If it is all in good fun, showing some humor can certainly help humanize your brand and definitely gets people talking (I’m writing a blog about it, after all). However, I wouldn’t recommend many brands add pranking to their social media marketing plans.

What do you think of Chipotle’s prank? Would your brand consider doing something similar to expand its social media reach?

After graduating from Miami University with a degree in Journalism and English, Justine immediately immersed herself into the marketing world. At Kuno, Justine leads in the execution of social media campaigns, media planning, project execution and content creation. You can connect with her on Twitter.