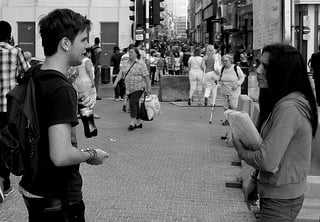 How (and Why) I Changed My Social Media Habits

A few years ago I wanted to be an "influencer." That was the buzz word for someone who commanded a large following in social media and generated a lot of conversations that could lead to all kinds of good and bad karma. Like many marketers, my goal was to drive lots of traffic and leads to our website with the hope of converting at least some of them into loyal customers. I wasn't too worried about my personal brand, figuring that would naturally enhance itself over time as I became a Pied Piper in Twitter, Facebook and LinkedIn. To accomplish the mission, I used tactics that now seem silly, like using autofollow and autopublish software, grading myself on Klout and worrying about my follower metrics. I'm a little late to the party, but I have finally seen the light, and I'm not doing any of that anymore. Here's why.

Back in 2011, well-known influencer Chris Brogan suddenly announced that he was unfollowing everyone (about 131,000) on Twitter. Most people were mystified because the game back then was all about being the most popular celebrity on Twitter, and Brogan was at the top of his game. Chris Brogan's reasons were his own, but they mostly boiled down to TMI (too much information). He had gotten out of touch with people he really admired and respected and was weighed down with far too many he barely knew (if at all). At the time I thought this was a pretty cool idea, but I still wanted to be an influencer, so I gamed the system by using lots of Twitter lists, filters and views that narrowed down my streams to my real circle of friends and people who influence me. I still grew my Twitter followers, Facebook friends and LinkedIn connects, thinking they would all want to share my content with their friends and so spread the word about Kuno Creative. I was wrong, dead wrong.

Why I Was Wrong

Chris Brogan was right. He was just ahead of his time. That's why he's a real influencer, and he does that for a living. What I have finally realized is that it's not a numbers game. We don't want tons of traffic and leads anymore. We want bonafide, qualified customers. We want people engaging with us because they like what we're saying and doing and want to know more. That's it, plain and simple. Social media is far more useful and entertaining when it's all about real dialog, not promotion. Big numbers don't accomplish anything. Small numbers of real, interested collaborators are the ultimate goal if you want to leverage social media for business. If not, then social media is still a great place to learn and discover new ideas and pathways to personal success and happiness. It's not a substitute for real, personal engagement, but it's a perfect way to stay more connected when distances are great and time is precious.

I haven't pulled a Chris Brogan and dumped all of my followers yet, but I have stopped all of the automatic practices. I only follow people that I'm truly interested in following now, and I don't filter them out. I'm working on winnowing down the followers across my channels to find a core group of people I can learn from and collaborate with. My goals have also changed. In a nutshell, I now want to:

Why I'm Late to the Party

It's amazing to me how fast things change these days. As I mentioned, just 1.5 years ago it was considered heresy to dump all of your followers and go for a select group of people you know and trust. Now, this idea is pretty much mainstream. There are still plenty of people who care about the numbers, but I think they are missing the boat. Social media is rapidly evolving into what it was originally intended to be—an online place to be social. Yes, there's plenty of marketing going on, and there always will be, but if the real influencers are saying "stop, slow down," the rest of us will eventually follow.

With over 30 years of business and marketing experience, John loves to blog about ideas and trends that challenge inbound marketers and sales and marketing executives. John has a unique way of blending truth with sarcasm and passion with wit. Connect with John via Twitter, LinkedIn or Google Plus.