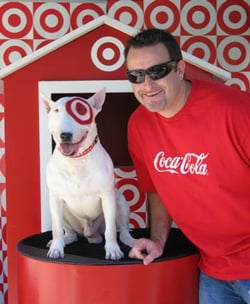 The Target brand is on target (pardon the pun) with its latest slew of interactive social media and television ad campaigns. In the past few months, Target has been demonstrating a blend of online and offline interaction many brands (big and small) are trying to achieve—so what has it been doing right?

When originally launched, the Tweets-To-Runaway campaign on YouTube for the Everyday Collection had enough viral sharing to make it worth Target's efforts, but now it's gone well beyond that. The brand's latest marketing tactic highlights that the mega-store really does understand its audience, remembering the "why" behind their brand.

Everyone needs so-called "everyday" products, but the general consumer may not immediately think of Target as the main store at which to make these purchases. Target's trying to change that by showcasing the everyday-ness of its brand and goods, but rather than highlighting price points or showcasing specials and deals, Target's taking a different route, choosing to appeal to the glamorous side of buying laundry detergent, milk and prenatal vitamins.

Target took its YouTube videos one step further by launching a Tweets-to-Runway live show on January 24. You can catch highlights from the show here, but my personal favorite (and now an office joke) is on the left —"I am a baked potato."


The idea was simple enough: Have users enter for a chance to have their tweet (#everydayshow) read live by a fashion runway model holding an every day product. The brilliance behind this strategy is that consumers were marketing for them in a way the buyers could obviously relate to. That's genius! Don't spend hours thinking up concepts that might resonate with your audience—instead, have your audience do it for you. Plus, it's also a nice capitalization on the random quirkiness of Twitter.

In a world of DVRs, Target made fast-forwarding through commercials a bad idea! Target and Neiman Marcus joined in launching a new line back in December with a five-part vignette mini-series during an episode of Revenge titled "Penance." The mini-series commercials didn't just feature the actors from the show, but the actual characters, in their roles, receiving mysterious gifts from the NM collection and a note to rendezvous to an even more mysterious location. The plot thickened with each gift (and commercial): Who was inviting everyone? Where were they going? And can I pre-order that dress?! (That last one may have just been me, but isn't that the point?) Nobody wants to miss out on something featuring characters of the show they're watching—even if it is during a commercial break.

What a great way to capture audience attention and see instant measurable results. How many pre-orders came through during the show or right after?  I'd safely bet it was more than just me.

It's not always easy to capture the mood of your audience, and one consumer won't be identical to another—but Target's always been good at capturing the essence of its audience. It isn't just a trip to the grocery store or stocking up on toilet paper. The store is a Mecca for finding cute clothes, solutions to everyday issues and entertaining additions to every aspect of your life. How many times have you walked in for one thing and walked out thinking you should just buy stock in Target?

Plus, they use a dog as a mascot—people love puppies!

So where does that leave your brand?

Don't focus on the large budget productions and expansive nature of Target. Instead, find a way to stop trying to get customers to come to you, and go to them instead with your ideas. Allow them to personalize it and interact with it.

What are other ideas for interactive campaigns that have worked for your brand? Share in the comments below!

Maddie Weber is a Web Developer for Kuno Creative. She truly enjoys being creative, drinking lattes, focusing on user experience for website design and development, and writing haikus. You can connect with her on Twitter.