How do designers and marketers know how many segmentation pathways, navigation elements, calls-to-action (CTAs), banners and links belong on a page, in a column, above the fold, in the footer or on a landing page? Is there any rhyme or reason behind it? Any best practices? Over the years many scientists and psychologists have studied the human brain’s working memory and its ability to process and digest objects of information. Ever wonder why phone numbers are seven digits divided into three and four digits respectively?

In 1956 George Miller, a cognitive psychologist at Princeton University, concluded that the number of objects an average human can hold in working memory is seven in his paper, The Magical Number Seven, Plus or Minus Two: Some Limits on Our Capacity for Processing Information. This research has been expanded upon by many since, hence the seven digit phone number.

The most recent expansion was by Mikhail Rabinovich, neuroscientist at the University of California, and Max Planck, a graduate student at the Institute for Dynamics and Self-Organization in Gottingen, Germany. Their research looked at how human neurons fire when processing and recalling objects of information.

So as the number of digestible information objects increases the less excited the neuron clusters are and the weaker the pathways. This research defines the physical brain activity that makes The Magic Number Seven work.

The Rule of Seven

The takeaway from this research is that designers should try to avoid presenting more than seven similar and non-grouped items at one time. This could be navigation elements, ordered or unordered lists, or segmentation pathways.

Designers who are faced with stuffing 20 or more links in the footer of a home page can still use the rule of seven if they logically group them together in a visual way. The example above shows how a designer took all of that information and logically organized it visually to fit within the rule of seven.

This rule is typically used for presenting paths (links) to content with no barriers to consumption and does not reside within the content marketing sales funnel.

The Rule of Three

This is a writing principle that subscribes to the idea that when communication is presented in groups of three, it’s intrinsically more comedic, more satisfying or more effective than other size groupings of items.

The Latin saying “omne trium perfectum,” meaning, everything that comes in threes is perfect, or, every set of three is complete, has been used to describe this concept, too. The rule of three also fits squarely into the rule of seven. 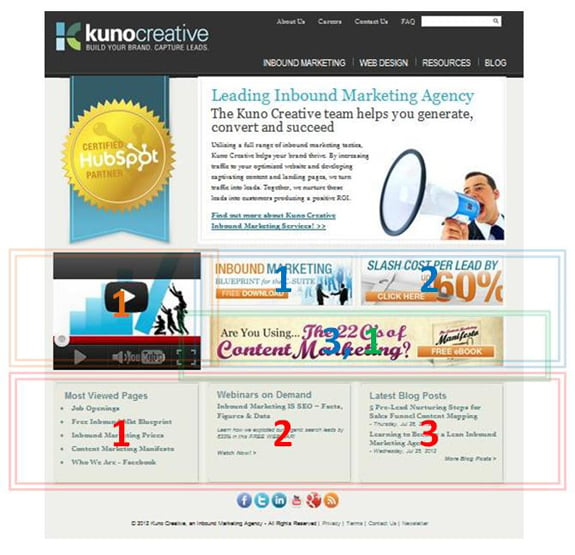 The above example shows the rule of three in conjunction with the rule of one (defined below). The CTAs in blue and green are laid out in a logical grouping. Together they look like one unit, but in actuality, they are three distinct CTAs.

Since the green CTA is distinctly different in size, it can stand out as one. The lower content elements are also laid out in a group of three. It’s recommended to always stick to the rule of three or below on top of the funnel CTAs and segmentation strategies.

The Rule of One

This rule should always be followed for bottom of the funnel content access and middle of the funnel content access where prudent. Generally, CTAs deployed using the rule of one are done so because they represent the most proven or profitable action for the company, the website as a whole or the individual page the CTA resides on. This is why there should only be one "action" button on a landing page, for example. 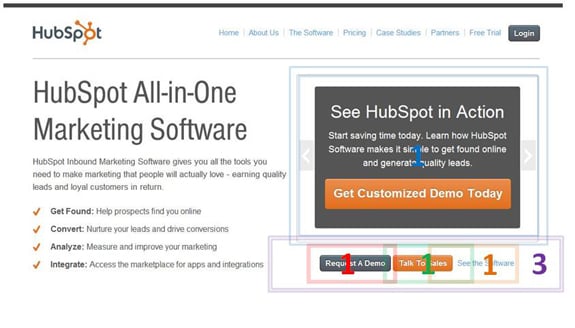 Most websites will never follow the rule of one, three and seven throughout. However, the closer it can be followed, the more a website can be digested and processed by the human brain. Deployed in conjunction with a clear, strategic content marketing sales funnel, it will undoubtedly lead to more conversions and sales, too. For more help with web design watch this live recording of two websites being audited for design, SEO and SMO.