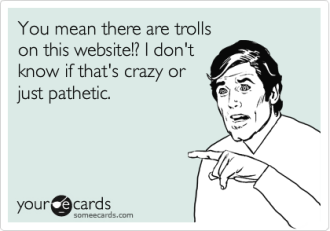 Ever been trolled online? You know, that angry or nasty person that leaves aggressive or inappropriate comments and/or posts on Facebook, Twitter, blogs, etc. They seem to be looking for an argument, a fight or simply to be annoying. Not the automated spam troll, but that real person you may know well, vaguely or not at all. What’s funny is that sometimes the people doing the trolling are completely oblivious that they’re acting like trolls. Below are 11 ways to tell if you've been a social media troll.

Do you know anyone who has displayed the attributes of one or more of the above troll personae? Most don’t exist in permanent troll-mode. It’s up to us to remind them they’re being troll-like when they wander off into troll-land. That’s what social media friends are for, right? If you’ve encountered a social media troll, feel free to leave their persona and a description below. However, if you leave a troll-like comment, don’t be surprised if someone lets you know about it. . .


Learn How to be Successful Using Social Media for Business