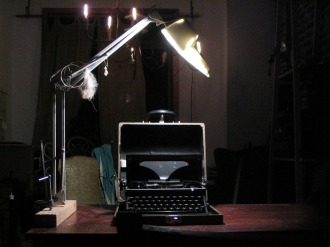 Very few folks are good prolific online writers. However, for those who are, most have one thing in common – they all have more website traffic and leads then they know what to do with and are generally considered industry thought leaders nationally or globally. Writing blog posts isn’t a requirement to be successful in Internet marketing, but over the last five years it’s clear that it is the most efficient way compared to other forms of online marketing like social media, PPC, webinars and presentations.

For those who don’t know Kevin Mullett, let me introduce him. I like to call Kevin the Swiss Army Knife of Internet Marketing. He was my first mentor in the business and is a walking online marketing encyclopedia. With more than 16 years in the business, he has more knowledge in his pinky finger than most will learn in a career. If you don’t believe me, give him a follow on Twitter, Facebook, LinkedIn or Google+ and prepare to learn.

Kevin and I don’t agree 100% on everything, but we both agree that it would be beneficial to all if he blogged more.

I’ve been pestering Kevin now for the last two years to blog two to three times per week (see Twitter conversation below), but alas, he’s only posting one or two per month. He’s prolific in his use of social media and gives great presentations, but that makes up the bulk of his content creation. People who know Kevin well appreciate his expert opinion and thoroughly enjoy his occasional blog post, but we’re longing for more.

@CPollittIU until efforts in other areas decrease, I become more efficient in my writing, or write when I'm having thoughts...not happening.


When experts like Kevin only occasionally write blog posts, they are denying the vastness of the Internet a steady stream of valuable problem-solving content while denying themselves the echoing affects blogging provides. That type of content certainly already exists from others and is being devoured online. It’s up to individuals to inject their own content into the feeding frenzy in a consistent and continuous manner. The great thing about this is that the cream always rises to the top and the best content filters northward over time.

Unfortunately, Kevin shares what so many prospects, clients and colleagues say – they don’t have time. I would argue that it’s not about having enough time, but rather rearranging priorities. Whether it’s spending a few hours less each week using social media or doing one less presentation per month, time can be had for writing.

Consistent, continuously written blog content is an appreciable asset and is much more efficient than most other online channels for brand building. It’s the gift that keeps on giving.

Google and the other search engines may continue to drive traffic to a blog post for years after publication. Referring websites that link to the content will most likely maintain that link forever. Social media sharing buttons allow others to distribute and share posts in a viral fashion. Lastly, the content produced, regardless of when, can be shared with prospects by sales staff so to overcome objections in order to nurture prospects down the funnel.

No matter what industry you’re in, you have valuable solutions to people’s problems locked up in your head. Investing large amounts of time developing depreciable assets is not the most efficient way to share knowledge and will produce far less leads than creating good problem-solving appreciable content consistently and continuously on a blog. This isn't an either/or proposition. It's best to build a foundation with appreciable content first and then spend time on depreciable channels.

What's in it for You?

So, with your help, we just might be able to get Kevin Mullett to start blogging more. I encourage everyone to send Kevin a tweet asking him when his next blog post will be available. If we bug him enough we might get him to reprioritize and share his expertise consistently, continuously and in a more appreciable fashion. If this works you’ll become a fan just like me. To get started with blogging yourself, access these valuable blogging how-to's.