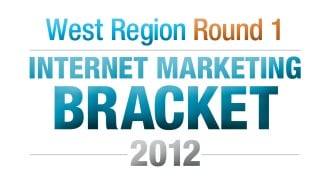 The Internet Marketing Field of 64 Tourney – Round 1 West Region

With two regions down in round one of The Internet Marketing Field of 64 Tournament, we still have two to go. Today we’ll take a look at the West bracket. Many experts would argue that the West boasts the best teams in the country with SEO, PPC, SMO, Twitter and Google+ all competing for a national title. The West bracket also saw the largest margin of victory ever recorded in the history of the tournament – 103 points. The results of the West region’s match ups are below. Round one South and East region results are available. Unlike the NCAA Tournament, if you have yet to fill out your Internet Marketing Field of 64 bracket, you can do so now. 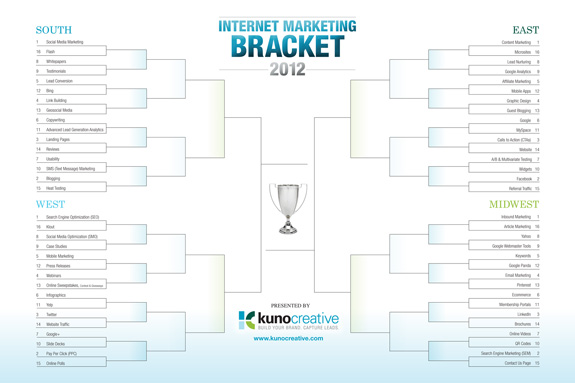 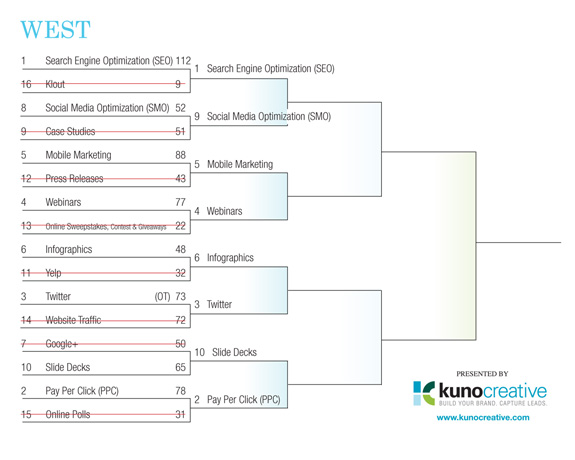 Unfortunately for Klout, measuring social media influence is pretty inexact. Last year saw Klout take hits to its reputation by many in the industry because of changes it made to its algorithm. Even if it was an exact science, they’d still have no fighting chance against SEO. SEO remains one of the most utilized tactics in Internet marketing today.

This game could have gone either way. Social Media Optimization benefits are tough to measure and can be described as more of a best practice than a tactic with success metrics. Case studies, on the other hand, can be powerful bait for a landing page form and success metrics are easy to capture. However, most online case studies aren’t behind a landing page, but rather, available on a generic website page. For this reason, SMO edged out case studies.

Press releases have many online and offline benefits from social media and SEO to interview requests and news coverage. However, hitting a homerun by getting invited on a TV show or having a respected magazine write a piece on the brand are rare. In addition, the actual audience who sees them is relatively small compared to other channels. In contrast, mobile phones are set to overtake PCs as the most common web browsing device by 2013.

Webinars and online sweepstakes, contests & giveaways can provide a flood of leads to a business. One of the Internet marketing differences between the two is that online sweepstakes, contests & giveaways cease to provide benefit after they’ve concluded. A webinar can be repurposed into several new pieces of content like video, podcasts and blog posts that can continue to drive traffic and leads for years after the event has concluded.

Yelp can help drive business to brick and mortar B2C-type businesses and its focus is local. However, the flood of complaints on the Internet seems almost endless. Much due diligence is required before using Yelp as an Internet marketing channel. Yet, infographics have catapulted into the marketer’s lexicon. They help explain complicated concepts in an easy-to-follow graphical manner.

Isn’t everything we do in Internet marketing to drive website traffic? How could Twitter possibly beat website traffic in a head-to-head matchup? Easy, Internet marketing isn’t about driving traffic, but rather, conversions and customers. If you have 20 million visitors and none of them turn into customers, what is the benefit? There is none. You’d be better off having one visitor who converted. On the other hand, Twitter can drive traffic to other public platforms like custom Facebook pages for conversion while allowing for direct communication with potential buyers.

Google advocates around the world won’t like this, but other than the SEO benefits, Google+ isn’t very appealing for the average business. Its website traffic is less than Ning and MySpace, and it caters primarily to tech folks. If that represents your target demographic, then it’s a savory channel indeed. Besides, Google is now forcing all new users to sign up for Google+. This further skews their traffic numbers. Slide decks can be used for presentations, webinars and blog posts and also shared across the Internet on dozens of channels. Slide decks are great ammo in a marketing world where content rules.

The biggest disadvantage to PPC is that once the money is spent, the traffic, conversions and customers cease. Online polls can provide a unique interactive opportunity for website visitors and can even be the source for data-driven whitepapers and consumer reports. However, online polls don’t tend to convert visitors to leads or leads into customers. Pay per click can drive traffic, leads and conversions.


That’s a wrap on the first round of tournament games in the West. Check back tomorrow afternoon when we’ll break down the exciting results over in the Midwest bracket. Every afternoon for the remainder of the week we'll publish the latest scores. Don’t forget, if you have an argument for one team over the other and it wasn’t addressed, or if you have a favorite you’d like to see advance, leave a compelling reason why below and you may see them in the final four.