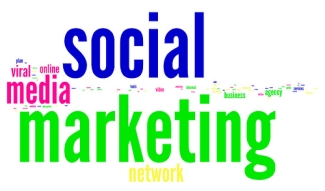 As mentioned in previous posts, Kuno recently dug through 26 months of analytics, chopped them up, diced them, examined every possible angle and generally ran them through the ringer in order to identify and discover missed opportunities, what worked and what didn’t. This post takes a hard look at conversion rates and traffic over the aforementioned time period for social media. The analytics below only contain organic social media data and does not include paid social media advertising. 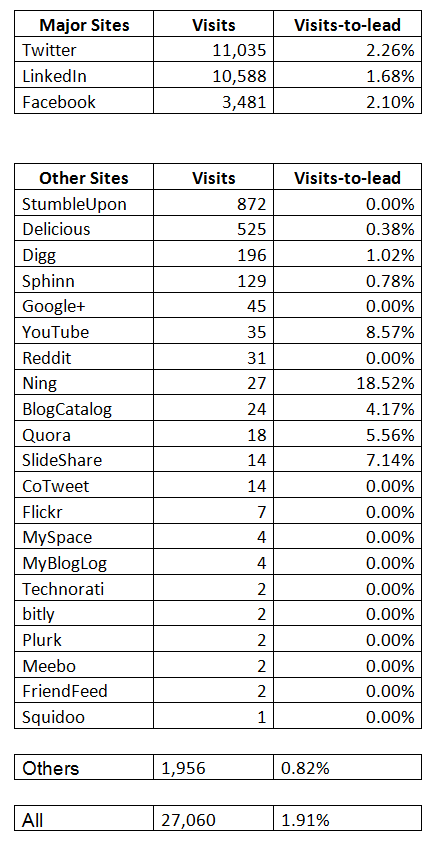 It’s important to note that Twitter launched their t.co link shortener in August of 2011. Prior to that, about one quarter of traffic and leads coming from Twitter apps like Tweetdeck were reported as direct traffic. In addition, the data from Twitter includes HootSuite figures. The result is a less than perfect data set for Twitter, but important data nonetheless.

Twitter has proven to be a robust lead source and content distribution channel boasting more than 11K visitors with a conversion rate of 2.26%. With no less than six people tweeting from their personal accounts and our branded account at least five days per week Twitter has demonstrated it is our most effective B2B social media marketing channel. To make it yours download our Twitter Marketing Cheat Sheet.

Admittedly, Linkedin was not a big priority during the first 13 months of this data collection. If you were to back that time frame out the data would show a conversion rate of 2.92%. However, the entire 26 month period shows a conversion rate of 1.68% with more than 10K visits. To learn how we nearly achieved a 3% visit to lead conversion rate over those 13 months download our LinkedIn Cheat Sheet.

Facebook sometimes gets a bad rap for not being a viable B2B lead generator. While the traffic numbers are nowhere near those of Twitter or LinkedIn, the conversion rates are definitely up to par at 2.1%. We were able to accomplish this through the use of fan-gating while offering up a custom designed resource center where videos and other resources were available. The TabSite Facebook app was used to create the custom pages. For more help with B2B Facebook marketing watch our video Building Leads with Facebook featuring the minds behind TabSite.

Based on the data it is clear that while StumbleUpon drives some traffic to the Kuno website, it doesn’t drive leads. Concerning the others, the data set isn’t really big enough to feel comfortable coming to real actionable conclusions. However, Ning and YouTube are definitely worth noting and developing a new strategy for those platforms are in Kuno’s near future indeed.

Overall, greater than 27,000 visitors navigated to Kuno’s website via social media over a 26 month span. This resulted in 1.91% of them converting into a lead which is more than half a point greater than conversions from organic search. At the 13 month mark we deployed a more robust content marketing strategy which saw social media conversion rates grow from 1.34% to 2.29%.

It is our belief that content marketing gave us more content to share and build a community around which resulted in more trust for Kuno and our employees on social media channels. This caused the conversion rate to increase during the second 13 month period. For help with your overall social media strategy watch our 3 Steps to Successful B2B Social Media Marketing.