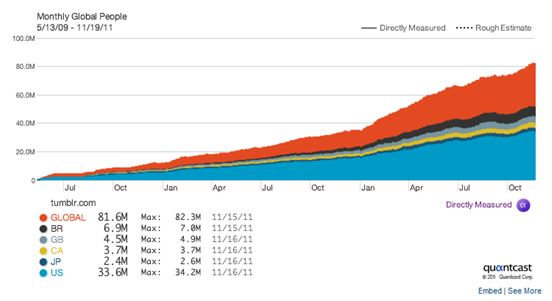 Why Your Brand Needs to Be on Tumblr Right Now

Tumblr is set to have another massive year in 2012. It’s not just because the microblogging platform has gained mainstream attention through blogs like Occupy Wallstreet’s We Are the 99 Percent or the Siri-inspired STSS. And it’s not just because some of the biggest brands are already on Tumblr, including The Today Show, J. Crew, and IBM.

That graph from Quantcast shows Tumblr’s exponential growth in 2011. Today, Tumblr hosts more than 35 million blogs adding up to more than 13 billion posts. For publishers or content marketers who are trying to reach consumers and build communities around their brands, the social platform has emerged as another reliable tool for sharing and interacting with fans - especially those in their teens and twenties.

Adding another social platform to your content strategy can seem daunting, but here are four things that make Tumblr unique in the world of social media:

The Tumblr community is more open to sharing your content: Just like Twitter, you can follow and be followed on Tumblr. Thanks to the platform users simply scroll through a steady stream of image-based posts that are very easy to “reblog” (more on this in the next section) and “like”. If you provide your follower base with the images and short content that they want to see, you’ll notice that followers interact with your posts more frequently than they do on other platforms.

Tumblr posts move faster and stay popular longer than a Tweet or Status Update: When you post on Tumblr any user can “reblog” your post.  What that means is they hit a button and post your post on their own personal Tumblr blog. Suddenly, you have two posts based on your content. Then one or two of that user’s followers “reblogs” the post

Your Tumblr post can stay alive for days, sometimes weeks or months, based on users reblogging posts that were reblogged from you.

Updating your Tumblr and building your community is easy: If you already have content, then you can get started right away. Just choose the image related to your content and write a one sentence description of the content to use as a caption. Add the links, and you’re set to post. Following and reblogging posts by other relevant bloggers is simple, too. Just “Search tags” on the Tumblr Dashboard, and you can find blogger who would be interested in your content.

So, should you be on Tumblr? Even if your audience isn’t there now, Tumblr’s growth has reached a point where you should at the very least secure your name. Once you have access to Tumblr, you can judge exactly how the micro-blogging platform fits into your content strategy.