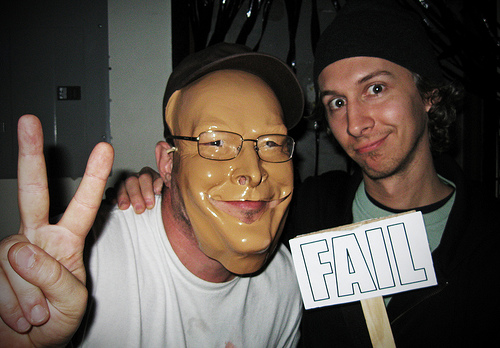 This week many, if not most, of us have seen our Klout scores drop 10-20 points or more based on a new "improved" algorithm that Klout implemented to deliver a "More Accurate, Transparent Klout Score". If that rationale were really true, most of us would be grumpy but satisfied to take our lumps and go about our business. The problem is that Klout's new scoring method is neither more accurate nor more transparent. They have, in fact, made a serious mistake in attempting to redefine influence and may soon be paying a price equivalent to that of Netflix.

"Influence is the ability to drive action and is based on quality, not quantity. When someone engages with your content, we assess that action in the context of the person’s own activity. These principles form the basis of our PeopleRank algorithm which determines your Score based on:

The problem lies in Klout's definition of influence.

While I agree with the underlying idea that influence is about inspiring people to take action based on quality, not quantity - Klout's algorithm does a 180 on their definition and makes it all about quantity. You are rewarded for how many people you influence and how influential they are, regardless of quality - i.e. how many people they influence. And what about quality, how do you define that? Sounds to me like we're talking about elitism here... Sorry Klout, but your algorithm contradicts your basic tenet and reason for making the change.

You can be a rockstar by hanging with rockstars?

Next on my hit list is your apparent reward for influencing the influencers. As most of us read it (and no, there's nothing transparent about Klout's algorithm), we are considered more influential if we have lots of social media conversations with other influencers. Really? So if I go chat it up with the Twitterati every day, I will eventually become one myself by virtue of my ever increasing Klout score? Who cares? Am I not more valuable and influential if I put out helpful content every day that helps people live better, work better and feel better? And if 1000 people that no one has ever heard of scoop up my content and share it with their friends, aren't I more of an influencer than someone who tweets about lunch ideas with a few power brokers every day? You guys have this thing completely backwards.

Why Klout and Netflix are now BFF's

My final rant is about the way Klout introduced this "improvement" and rationale for doing it at all. Yes, many people are disappointed in their lower scores. You must have known that there would be a huge backlash. At some level, everyone is emotionally invested in how they are "graded". We get this competitiveness and insecurity about our self-worth permanently stamped on us in grade school. So yes, most of us care. If we're being mature about our scores, we look at them as a way to monitor our progress and make adjustments to become better social media citizens. Marketers, of course, have a huge stake in this rating process. Influence is one of the metrics our clients look for, and our performance and reputation is also scrutinized by potential clients. So yes, Klout, you probably cost me some money this week.

My point is that Klout could have handled this whole thing much differently and avoided what will surely be a precipitous decline in membership and perceived authority. You could have crowdsourced these issues about influence and algorithm and made changes over time that made sense to your stakeholders as well as your brain trust. Instead, you revamped in a way that you knew would cause tremendous consternation and dumped it on us overnight? Most of us woke up to a large drop in score and, strangely, charts that showed that we have been losing ground rather than gaining ground over the past month or two. How can that possibly be, since you just changed the algorithm? Most of us scratched our heads and said "what were you thinking, Klout?" Sound familiar? Yes, Netflix tried this same approach, and look where it got them.

Now, let's not forget about customer service and transparency. At this juncture there is no simple way to quit Klout and undo your social media tethers to Klout. I have been trying all week, including emails and direct messages, but to no avail. Wow, guys, this is a classic example of how NOT to treat your members. I wish you well Klout, but I'm out.