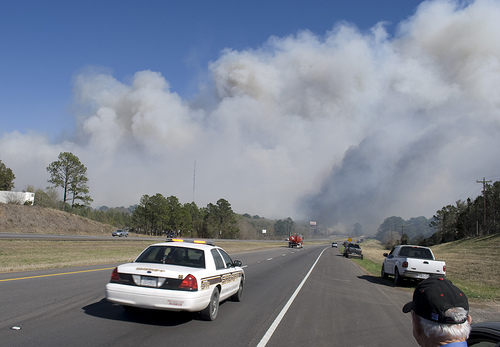 The Power of Social Media During Disasters - Texas Wildfires

Yesterday I saw a massive wildfire about 5 miles west of where I live. You couldn't miss it - the entire western sky was filled with smoke. That wouldn't normally be an event worth reporting to the world, and thankfully, it was controlled within 6-8 hours. The fact that this is happening across a state the size of many countries is truly alarming, and without Twitter, I wouldn't know whether one is coming my way or not.

Texas has been hard hit by heat and drought this year, so much so that the entire state has been under "red flag" warnings for much of the summer. That means that any spark, be it man-made or natural, can erupt into a wildfire and consume thousands of acres in short order. Put us on the back end (the dry, windy side) of a slow moving tropical system, and you're gotten yourself into a world of hurt. I'm following @Texasfiredotcom on Tweetdeck, because I would really like to know if there are fires to the north coming this way and how communities are dealing with this disaster. I found out about @Texasfiredotcom by asking "Any Texans know of a good site to monitor the fires?" @alyhell responded with a couple of good recommendations.

My point is, how would I have found out via Google or any other wait-for-a-response social network? Twitter is near-real-time, and if you have any followers at all, you have a huge resource of people to ask. I'm at least a little comforted to know that I can listen to the streams about the fires in Texas and be pretty sure that they are up-to-date. Add to that the fact that many others are doing the same thing to protect their homes and families, and you have a bona-fide neighborhood watch on your side even if you live out in the boondocks like I do.

It's easy to take the power of social media, especially Twitter, for granted in times of crisis. But when you have one staring you in the face, it's a different story. I wish all of my fellow Texans best of luck until this wind dies down and the fires are out. I want to personally thank all the professional and volunteer fire fighters out there risking their necks for the rest of us. Your efforts are not going unnoticed these days.