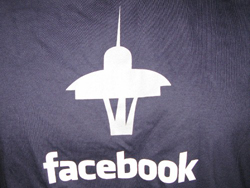 Zuckerberg - Social Media is at an Inflection Point [Analysis]

Zuckerberg began his presentation with the notion of social media at an inflection point. The last 5 years were focused on creating connections and building out the social media infrastructure while the next five years would center around best in class apps forged within this infrastructure. Companies, Zuckerberg suggested, will need to focus on optimizing their products and services for the social ecosystem.

One of the interesting metrics discussed was the exponential rate of sharing - which is doubling every year. Zuckerberg referenced Moore's Law when referring to this exponential growth as the Law of Sharing. 4 billion items have been shared on Facebook. The killer apps of the future would support this continued growth in sharing.

The Products - Not for Mobile Though

The new products announced were group chat, updated chat design, and Skype-integrated video calling. Interestingly, when asked which of these products were mobile ready, Zuckerberg said they were more web focused than mobile focused.

What Mark Zuckerberg Got Wrong

In explaining the shift in simply connecting people in a social network to the construction of valuable apps within the network, Zuckerberg seemed to assume "social network" equaled Facebook. That may not necessarily be true - especially with the emergence of Google+. Even with Skype's integrated and efficient peer-to-peer technology, Facebook still appears to be focused on connecting people (via video - like MySpace in 2007) rather than providing ways to socially optimize products or services.  Ultimately, users may not want to limit themselves to best in class apps just within Facebook. Perhaps Facebook will turn into a middleware "app" within a high level "app integrator" like Rockmelt. Maybe the future will see more items shared via Rockmelt, Twitter, and Hootsuite than through Facebook. What if the true aggregator that harnesses the Law of Sharing hasn't even been developed yet?

Zuckerberg's statistic of 50% of Facebook users also being Facebook Group users still does not address the need for proper segmentation. The Groups feature is still clunky and top-down. Groups are focused on topics and interests. A bottom up approach like Google + offers with its Circles feature is more effective in setting up virtual walls between what you share with friends as opposed to co-workers or family or other business colleagues.

Finally, Facebook's seeming lack of attention to mobile usage is troubling. Many users will soon have mobile-only web experiences and Facebook's lack of mobile-targeted development could send users elsewhere.

What did you think of the press conference? Will Facebook video calling take off and create a whole new series of apps and advertising opportunities? How might Facebook eventually charge for video calling?