The Internet Corporation for Assigned Names and Numbers (ICANN) has the task of creating and continually re-defining  Internet Protocol (IP) - the language of the Internet. They oversee the function of standardizing technical protocols for the Internet root-servers, allowing communication to flow seamlessly and globally.

From ICANN's about page:

"To reach another person on the Internet you have to type an address into your computer - a name or a number. That address has to be unique so computers know where to find each other. ICANN coordinates these unique identifiers across the world. Without that coordination we wouldn't have one global Internet."

Incorporated as a not for profit public-benefit organization in  California, ICANN labels itself a “private-public partnership.” ICANN’s organizational structure, mission statement, and by-laws were established based on recommendations from the Department of Commerce (DoC) in 1997. ICANN was to be responsible for the, “technical coordination of the [Domain Name System

] DNS to the private sector in a manner that promotes stability and security, competition, bottom-up coordination, and representation.” To that end, ICANN uses a multi-stakeholder model and encourages EVERYONE on the Internet to participate in the decision-making processes which looks something like this: 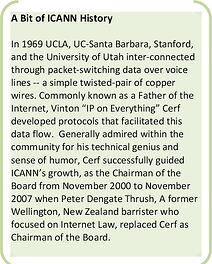 ICANN has three physical Board Meetings a year in various locations throughout the world and all stakeholders are welcome including anyone who has an interest in contributing to the evolution of the Internet. The board meeting going on right now in Singapore will end tomorrow (June 24th) and the next one is scheduled for October in Dakar, Senagal. Most ICANN meetings are attended by stakeholders throughout the world via Internet Protocol -- what else.  ICANN sells blocks of addresses to accredited registrars (Network Solutions, Go Daddy for example) who in turn sell domain names to the consumer. The de-centralization of registrars virtually created a new global industry where there was none before.

After Chad Pollitt published his "dot anything goes" blog there was an internal discussion as to whether or not it's worth the $185K to buy a "dot your company name here". When you consider the enormity of ICANN's global mandate and the number of customers they serve - currently two Billion Internet users - $185K seems like a bargain to me. Introducing new top level domains to the Internet's root servers can't be easy. No doubt Coke will pay $185K for .COKE and Amazon will surely come out with a .Amazon the minute it's available. I'm more curious as to who will lay out the $185K for .Soda, .Book, .Hotel, .Movie, and how about .Cats?

There is plenty of speculation surrounding the introduction of new top level domains and how it will affect inbound marketing strategies and SEO, but no one knows for sure. The Internet and its infrastructure is in constant flux and the best way to prepare for change is to know how it works and the history of its evolution.