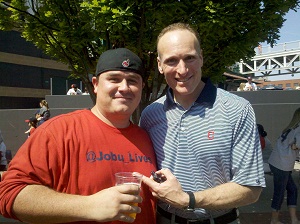 I must admit, the latest end of the world scare had me quivering in my boots. The Cleveland Indians were in first place, the Cleveland Cavaliers won the NBA draft lottery, and Cleveland Browns running back Peyton Hillis was slated for the cover of one of the most popular video games in history. Clearly, I thought the apocalypse was upon us.

Fortunately, the world did not end and the Indians are, for now, still in first place not only on the baseball diamond but also in the social media arena, especially on Twitter. Certainly, individual athletes have been able to expand their influence on Twitter. The Cleveland Indians, however, have built a social media strategy across their entire organization. Last year, while suffering from low attendance, the Indians launched the Tribe Social Deck for bloggers and social media users. This year the Indians have a dedicated social media suite with an online application for admittance and social media ticket offers available only to Facebook fans and Twitter followers.

What are the differences between the Indian's social media success and other failed corporate social media efforts? There are a few:

Whether you are a marketing manager or Director of Marketing remember, don't tweet alone. Have a strategy in place and publicize it. Don't know exactly what to do? Check out our resources page for help.