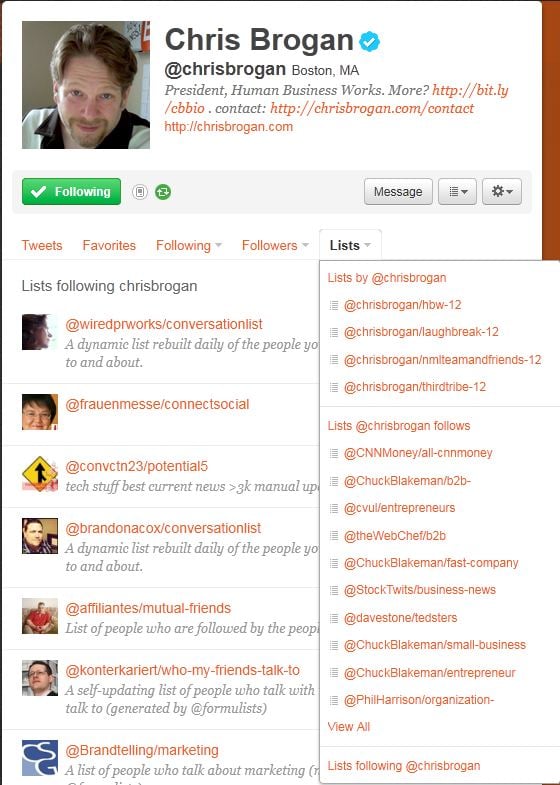 Most regular Twitter users are familiar with creating and following lists. Twitter lists help you narrow down your incoming Twitter streams to a group of trusted people you follow or certain topics that are relevant to your business. Lists are also extremely helpful in finding influencers in your industry, following them and building your own influence over time. Here's how I work with them.

Step 1 - Find Influencers in Your Industry

You can do this several different ways, but the simplest is just doing a Twitter search on a relevant keyword or hashtag. For example, in Twitter I might search for "#gis" which is a hashtag used by people interested in geographical information systems. This will pull up recent tweets by people who include the #gis hashtag, enabling you to get a quick snapshot of the activity for this topic. Scan through the tweets and find people who are posting frequently and/or are being retweeted often. These are your influencers for the topic. View their Twitter profiles to see their Following, Followers and Listed statistics. If they have more than a few lists, you have probably struck pay dirt.

Step 2 - Mine Their Lists

You should spend some time every day adding influencers to your own lists (again, to improve your own streams), but now that you have found a true influencer in your industry you can leverage their knowledge and curation skills. Click on your influencer's Listed link (in Twitter), which brings up a new set of tabs in the main content area (underneath their profile photo). Click on the Lists tab, and it will expand to show Lists by @influencer... and Lists @influencer follows (where @influencer is the twitter name of your influencer). Exploring these lists will often show you, by specific topic, a list of people your influencer trusts. Bingo. Click on their profiles and follow those that are active tweeters and those with a relatively high Following/Followers ratio. These are people who have influence and are likely to follow you and retweet your excellent content. Retweeting is one of the primary ways your content can spread throughout the internet.

Tip: Follow a few new people from these lists every day. Don't follow hundreds at a time. You want to grow your network slowly and steadily over time - which gives you the best chance of forming relationships with other influencers and doesn't look like you are trying to "game" the system.

As you build your network with Twitter lists, add your new influencers to your own Twitter list(s) and follow those lists as streams in your favorite real time Twitter client, such as Tweetdeck or Seesmic. Retweet the best tweets that are relevant to your own content and don't be shy about tweeting about the best blog posts you see in your favorite RSS  and e-mail feeds. Don't be overly self-promotional and be as helpful as you can. Eventually, you will be recognized by others seeking influencers in your industry (just as you did), and you will be included on their Twitter lists. Engage with other influencers directly, ask questions or answer theirs. The more actively you participate (in a non-spammy way), the better chance you have of gaining their attention. The payoff will be building valuable relationships and building your own influence to become a recognized resource in your field. Now you have the power to (occasionally) promote your own content to an ever-growing group of targeted listeners, who may ultimately become your loyal customers.

How do you build your own social media influence?