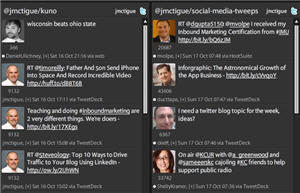 Why You Should Be Using Twitter Lists for Inbound Marketing

The other day I was amazed to discover that people in my own company aren't using Twitter Lists as a routine part of their inbound marketing agency activities. Some even expressed the view that Lists are useless; others didn't understand how they are useful. I was surprised because I use them all the time and rely on them for most of my sharing and learning on Twitter. Here's the rundown.

Simply put, Lists allow you to filter the tweeps you follow into categories, i.e. groups of people you trust and/or monitor on Twitter every day. An example would be a list of people in my company, so I can monitor and support their tweets. Another list would be our clients, so I can see what they are engaging about and add my own tweets or retweets to support theirs. Finally, I create lists of what Chris Brogan calls "trust agents", people who educate and influence me online, whose tweets I routinely read and retweet. If you have more than a few hundred people that you follow, you know it's impossible to monitor all of them, so lists allow you to do that. The cool part is that you can use Twitter clients, like Tweetdeck, Seesmic and Hootsuite to segment your Lists into columns, which really makes the job of monitoring them easy. In Twitter itself you can expand the dropdown menu below your avatar and profile and select one of your lists to filter the incoming tweets.

This is really easy. On Twitter, in the list of links right above your twitter stream, there's a "Lists" pulldown menu. Expand that and select "Create a list" (right below the "Lists by You"). Give your list an appropriate name and description that categorizes the people in your list. Unless you have a really good reason to make the list private (like clients for example), set it up as a public list. If you create good, representative tweeps for your lists, your followers will find them and follow them - which only enhances your reach and authority. While you're tweeting, reading and retweeting tweets, keep your lists in mind and add people to your lists.

In Twitter, you can click on a person's avatar, which brings their information up in the right column. Expand the second pulldown from the right in the "following" bar and you see a checklist of your lists. Add the tweep to appropriate lists by checking them. It's that easy.

In Tweetdeck, rollover a tweep's avatar and click the icon in the lower right corner (I think it's a little different on Mac's, so please chime in). Then select User > Add to Group/List, find the list(s) you want and check it, then click the Finish button. Very similar workflow in Seesmic and Hootsuite. To manage a list, you select the list and check or uncheck members.

You can also join public Twitter lists based on topics of interest via sites like Twibes. People who follow those lists will find you, which expands your reach and improves your chances of being heard.

Overlooking the power of Twitter lists is a big mistake. I don't see how people can manage their Twitter activities, especially if they manage multiple accounts and lots of followers, without them. There's just too much information and too many tweeps  out there to try to read and engage all of them at once. And don't overlook the power of being included on other people's lists. This greatly increases the odds that you will reach other people with your ideas, recommendations and promotions.

Free Webinar: How to Build a Social Media Infrastructure 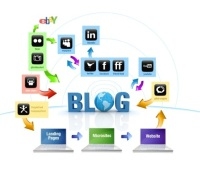 Social Media Infrastructures are multiple social media platforms chosen for engagement and how they are connected to one another.  Most companies that fail in social media marketing have each platform in a silo without regard to SEO, connectivity or the efficiencies of time and message that can be gained.

How Do PR Tactics Fit Into Your Demand Gen Strategy?