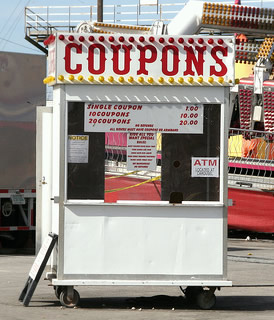 Say hello to the latest trend in B2C marketing. Services like ShopKick, Groupon and Yelp offer coupon discounts for their member stores delivered via social media and cell phones. Say goodbye to coupon clipping. With Internet sales gaining over in-store sales, retailers are looking for ways to lure customers back to the shopping centers in which they're heavily invested. Each of these "players" has a slightly different approach to marketing.

Shopkick delivers merchandise coupons and special offers right to your cell phone. Capitalizing on the instant immediacy of Twitter and the universal popularity of smart phones, Shopkick beams store ads directly to consumers' cell phones as they walk in the door of a store. With Shopkick, retailers can instantly reward their customers with exclusive coupon savings and special offers just for walking through the door. Shopkick sweetens the deal by awarding consumers with "Kickbucks," redeemable for songs on Napster; Facebook credits and cash-back rewards at participating stores. Social media campaigns on Facebook and Twitter are planned to introduce the program and alert consumers to Shopkick deals. Shopkick is one more step toward the total integration of the Internet capability, social media immediacy and smart phone convenience to enhance and influence consumer buying habits.

Groupon offers deep discounts via featured coupons that change each day. The catch is that a sufficient number of people must join the "Group" following the promotion to activate the "Groupon". This "collective buying" approach gives deal-seekers an added incentive to tell their friends about the offer, and so kick off a social media feeding frenzy that drives customers to each business with a featured Groupon promotion. The service also takes advantage of today's personalized search trend, sending only Groupon ads that fit your consumer profile. The feeding frenzy is also among businesses wanting to become a featured Groupon advertisers.

Yelp is more like a smart Yellowpages. It "knows" your location, and finds shops, restaurants and entertainment in your area. Each listed business has consumer reviews and ratings, direction maps and social media and mobile sharing. Yelp is also experimenting with online coupons, or "Yelp Deals". In Yelp's case, there is no restriction to a single daily coupon, and the company is currently testing the service in San Diego only. Expect Yelp to join the wildly popular mobile coupon craze in full force soon.

There will undoubtedly be other players soon. The interesting thing about mobile coupons is that they generally require you to purchase in-store instead of online, an interesting twist on online marketing. Will B2C marketing embrace the new coupons and promote them to the top of their inbound marketing strategies? It's already happening, and your company may be the next big participant.

What's your B2C marketing strategy? We have lots of ideas, including mobile marketing.