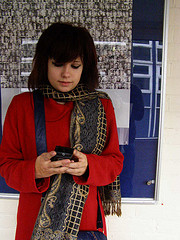 Is Texting a Part of Your Inbound Marketing Strategy?

The younger generation just pounded another nail in the coffin of traditional outbound marketing. Texting has replaced telephone conversations as the primary method of communication. Like most communication advances, it's a generational thing. Boomers still phone each other, but their kids reply by text messaging. Isn't it time to add mobile marketing, particularly texting to your inbound marketing strategy?

A recent Nielsen survey found that, with the exception of 50- and 60-year-old baby boomers, all other age groups were spending less time talking on the phone and more time exercising their thumbs to send texts. Among 18- to 34-year olds, the most coveted advertising demographic, average monthly voice minutes have decreased from 1200 to 900 over the past two years. Over the same period, the average number of monthly text messages has more than doubled from 600 to 1,400.

In America, the telephone is quickly going the way of newspapers, paper books and the big 3 TV stations, replaced by texting, email, Facebook and Twitter. In fact, the younger generation's reliance on social media as a primary vehicle for communication is changing social mores regarding communication. Consumers in the 20's and 30's now consider voice communication to be rude and intrusive because it forces an immediate response. Communication via text, Facebook and Twitter is preferred and considered more polite because it allows the recipient to peruse the message at his convenience, not the sender's.

Businesses that want to stay connected to their customer base and/or build a following among the lucrative 18 to 34 age group must embrace the future and move their marketing efforts from outbound to inbound marketing vehicles, texting included. Mobile (text) marketing has arisen in recent years to address this rising millennial marketplace. Marketers purchase a "short code", the mobile equivalent of an Internet domain name, and use it to advertise products to an opted-in base of consumers. A marketing campaign might consist of buying one or more keywords

What's particularly interesting is that not only are the millennials driving the world online, they're expecting it to be portable so they can access it wherever they go. Savvy inbound marketing professionals are using social media to design inbound marketing campaigns that are not only centered on the internet, but can be accessed on the go from smart phones, notebooks and iPads.

In the next few weeks, I will address all kinds of mobile marketing strategies, including mobile websites, apps, location-based services and social media via smart phones and other devices. These channels are growing at blinding speeds, yet most marketing companies are scratching their heads. My mission is to provide the dandruff shampoo.

Oh, and by the way, for those of you who think this texting stuff doesn't apply to B2B, how old is Mark Zuckerberg? That's right, he's 26. There's a gazillion CEO's out there that age. Think about it.

What do you think? Are you inbound marketing while texting? It's legal!