Print Marketing RockStar? How do the "deals" affect your brand? 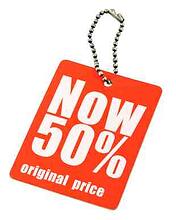 It’s common to be lead down the road of “Savings”, a “Great Deal”, and “A Discounted Price”.  And why not take advantage of these great discounts, particularly since the newspapers are hurting these days?  Because -- you can sacrifice the quality of your brand by simply seizing these great deals as they fly by and not putting the appropriate strategy into the decision-making.

I won’t place blame on anyone for doing this, but this rationale can be a major distraction.  It takes your eye off the prize, which is making an investment in your brand as a long-term asset.   A “great deal” is tempting, but it requires completed strategy, concepts, and artwork within a very short period of time, and most importantly, consistency in your branding.   And unless you can afford an on-call strategy/design team, you’ll end up accepting a reactionary concept because it was fast… and cheap!

Yes, there is great value in print advertising, even more so when integrated with a thoughtful campaign.  So here are a few basics to leave you with when considering your next print campaign:

Design and Copy
A larger ad might attract attention at first, but a well-designed ad will attract viewers and compel them to focus in more closely on your message.  By contrast, something sloppy, unprofessional or ugly will likely be glanced over or laughed off.

Positioning and Size
The location and size of your newspaper ad design is obviously dependent on the sources availability and your budget.  From an advertiser's standpoint, certain spots may be more or less ideal depending on the particular publication in question.

As a general rule, consider at least slight redesigns to an ad if it is going to be either particularly large or particularly small.  A redesign might make sense to maximize the investment of a large advertisement, while a redesign for a small ad might be essential for all parts of the ad to be seen and understood.

Color
With any color choice, it’s worth considering the papers where the advertisement will run.  If competing ads include a predominance of pictures and vivid colors, a more subdued color scheme might stand out.  The opposite also applies, of course.

So, should you go for the "Great Deals",  Yes or No?  The answer is - "It depends".  Are you going to have a print ad strategy that works, or are you going to just chase the deals  -  in this economy, the time is right for you to be a Print Ad RockStar?