B2B companies often feel handicapped in their efforts to market on social media. Typically, they believe B2C companies have the upper hand because these companies have a greater opportunity to create visually interesting, compelling and sharable posts, graphics and campaigns. But nothing could be further from the truth. Many B2B organizations are launching successful social media campaigns and generating significant results.

To gear up for a new product launch, Juniper Networks brainstormed ideas to gain the attention of both its existing data center community and new audiences. But initiating conversations with busy, marketing-adverse data center engineers wasn’t going to be easy.

Juniper knew that engineers in its social communities value hands-on learning opportunities. Additionally, they like to celebrate their interests and share visuals of what they have created with others. This is particularly true with individuals who are known to have authority within the industry.

Then Juniper hit on an idea—a Lego contest! After all, what tech engineer as a child didn’t love building things, breaking them down and building new things with the building blocks? And what could be more visually interesting?

The company invited 10 key influencers to participate in a challenge to build the best data center design out of Legos and to feature the designs on their blogs. The first-, second- and third-place winners would be rewarded with a donation to the charity of their choice. To begin, each influencer was mailed a starter kit of Lego pieces and told they were licensed to incorporate any other Lego pieces and materials to create their ultimate design.

The company launched the competition on three social media platforms: Facebook, LinkedIn and Twitter. Each influencer brought their designs to life in ways that demonstrated their interests, opinions and values. The designs ranged from a Star Wars data center to a “Back to the Future” data center to an eco-friendly data center.

Knowing this lighthearted content directly represents the interests of the community, the brand established a Facebook takeover the month of the product announcement. The company created a cover photo collage from the top images from each submission. It also rotated its Facebook profile photo showcasing the participating contestants.

Juniper leveraged Facebook’s photo-sharing capabilities to highlight the fun and engaging data center designs the influencers created. The company further leveraged the opportunities on Facebook to showcase the design images from all submissions. As it announced winners, the company compiled images from each submission, including descriptions and links to contestants’ blog posts.

The contest was a hit. It successfully initiated a data center conversation among the brand’s influencers and community members. Engagements with Juniper’s unique content increased 75.27 percent during the month of the contest. The increase was achieved through a social media snowball effect, including a combination of announcing contest winners on Twitter, influencer-shared news and amplification by the community through congratulations and retweeting the winners’ victories. 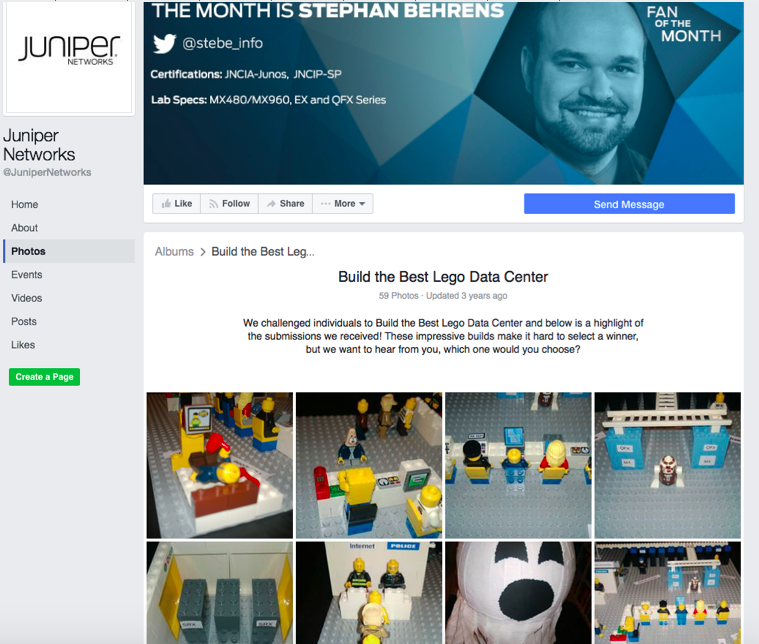 Chicago’s NorthShore University HealthSystem launched a social media campaign with a clear goal: To maximize exposure and pique interest among patients and potential patients in the community. It also wanted to build trust for its four award-winning hospitals and its medical professionals by allowing its current and future patients to interact directly with physicians.

To that end, NorthShore began looking for the best ways to share quality content with its target market in an informative and easily digestible way. The hospital began its social media program by first conducting a competitive analysis of other area hospitals’ social marketing efforts. It identified two gaps: hosting live Twitter chats and promoting infographics.

NorthShore launched a series of themed Twitter chats with its physicians using the hashtag #NSChats. Discussions addressed a variety of healthcare-related topics relevant to the public, ranging from breast and prostate cancer to brain tumors to back pain. The organization worked to increase engagement and raise awareness by identifying and targeting influencers to participate, and by conducting targeted outreach to capture audiences—no matter where they were in their patient journey. Many thought leaders in various fields found NorthShore’s chats valuable and offered support by engaging in chat participation and content sharing.

To maximize the Twitter chats’ impact, NorthShore created follow-up resources for participants. For example, they could view curated lists of questions and answers. Also, chat transcripts and tweets were shared on the hospital’s blog, giving patients another opportunity to interact.

Along with the chats, NorthShore also created an ongoing stream of infographics that aligned with national health-related observances and seasonal events, such as one to spread awareness during Breast Cancer Awareness Month in October and a holiday-themed health and safety guide in December. Each infographic had its own unique targeting strategy to boost exposure, and increase relevance and the likelihood of engagement.

The Twitter chats and influencer-targeting program were extremely successful. They helped the organization build trust and grow affinity within the community. NorthShore’s metrics for success included overall engagement in the form of post likes, post comments and post shares, as well as clicks to its website. For example, the breast cancer awareness infographic was liked 1,641 times and shared 218 times—respectively, 1,782 percent and 249 percent more than an average NorthShore blog post. The overall reach of NorthShore’s social campaign included 1.6 million impressions and a 291 percent increase in followers.

NorthShore stated: “When patients need a healthcare provider, it is usually for a specific purpose, which makes it difficult to get individuals to casually interact with a healthcare provider on social media. Brands need to create smart and appealing content to engage with their audience, but also build trust and communication with future and existing patients.” 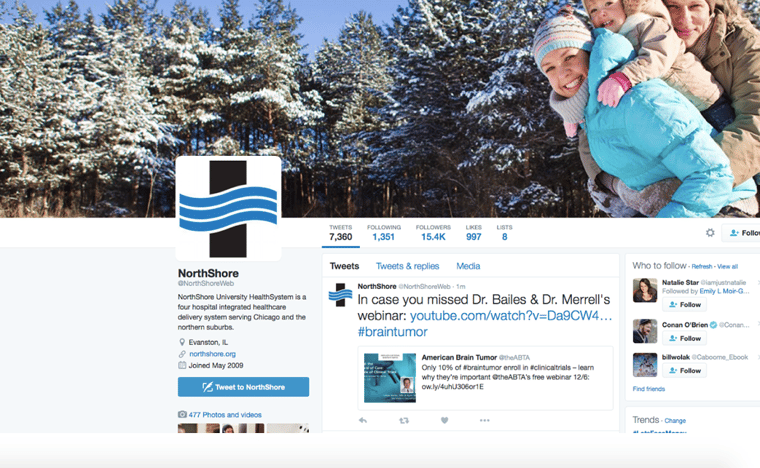 Before embarking on its voyage into B2B social media campaigns, Maersk spent a great deal of time listening to the social media scene, and researching and understanding the value, benefit and role of social media for a B2B company. The company doesn’t look at social media as a way to garner sales or generate leads, but as a way to reach out to its customers and employees. Its ultimate goal is to gain useful insight into the current market, get closer to its customers and boost employee satisfaction. By incorporating engaging content such as questions, photographs and links, it fosters conversations rather than advocating its products and services.

A great example is LinkedIn, where the company has 178,000 followers. After conducting a social media survey, Maersk found that its customers prefer to connect with them on LinkedIn more than any other network. The company uses the platform in a B2C manner to provide shipping industry news relevant to its followers.

In particular, it also has found that LinkedIn Groups offer a great opportunity to interact and engage with customers on a more personal level. The company regularly engages in high-end industry discussions in private groups it manages, including The Shipping Circle and The Reefer Circle. Users include shipping experts from around the world who debate industry challenges and opportunities with each other. Maersk has found these professional forums are a great opportunity to gain knowledge from experts who it might not otherwise meet.

Also, in a bid to introduce what it calls “social commerce,” the company uses LinkedIn’s Products & Services tab to describe some of its core products and ideas. Followers can then comment on them and provide peer-to-peer recommendations.

Maersk stated: “Social media is about communication, not marketing. It’s about engaging, not pushing. And social media is definitely not just about the media side. For a company like ours social media creates more value when it challenges the way we think and interact. In fact, social media is a mindset, a way of thinking and working together. It’s based on the fact that we are social animals, and that means we can only benefit from sharing our thoughts and ideas with each other.”

Juniper Networks, NorthShore University HealthSystem and Maersk Line are just three examples of the many B2B companies forging solid marketing programs on social media platforms. How can your company learn from their examples to find the best social platforms and create most compelling campaigns to engage your target audience, expand your brand’s awareness and build your leadership position in your industry?