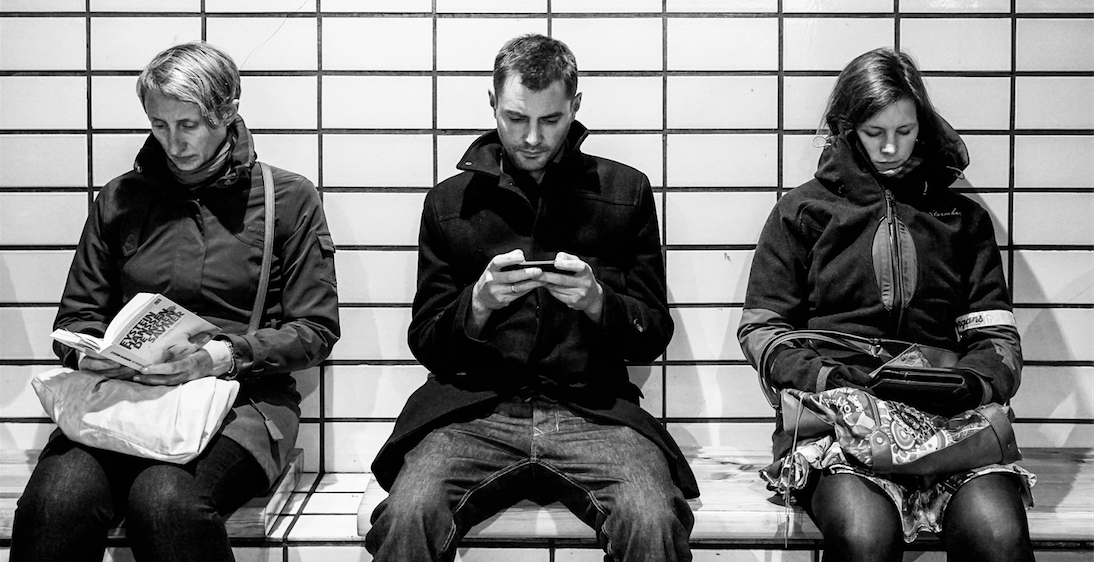 B2B Mobile Traffic Should Be Surging—Here's Why It's Not

As of August 2014, nearly 72 percent of US mobile users owned a smartphone. And last year, a look at website analytics indicated B2B mobile traffic was surging forward as one of the primary sources of website visitors. More devices and more mobile activity meant that mobile should be a continued growth area for marketers. If last year’s mobile marketing trend kept up, then this year B2B websites should have experienced yet another substantial increase. They did not.

That’s a surprise given that we know mobile Internet usage exceeded that of desktop for the first time in early 2014. Mobile optimization is a vital part of any marketing strategy because of device proliferation and evolving digital behaviors. But B2B marketers could be losing out on valuable mobile activity because they just aren’t getting in front of mobile visitors.

I had originally intended on writing a blog post about the importance of responsive website redesign services because visitors demanded it. (And they do, but more on that later.) Instead I was left with the question: If mobile usage is increasing, why is mobile web traffic for B2B companies leveling off?

Year over year, B2B websites saw a meager 1.5 percent increase in mobile traffic on average from the sampling of websites I looked at (10 sites in total). Whereas the B2C websites (6 sites) saw another jump of nearly 8 percent. Most B2C sites, in fact, now had an average of 38.5 percent mobile traffic, compared to only 13 percent for B2B sites. 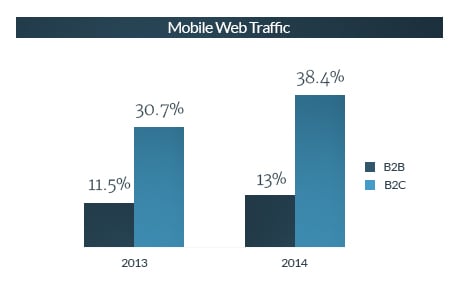 The performance difference between B2B and B2C sites isn’t that surprising. Even last year, B2C sites saw greater mobile web traffic. What stood out this year was that B2C sites gained as expected, while growth for B2B sites, for the first time in years, slowed.

Based on trends from the last few years, I expected average mobile traffic for B2B sites to fall anywhere between 15-20 percent of all traffic. But the B2B sites didn’t hit that number. Why? 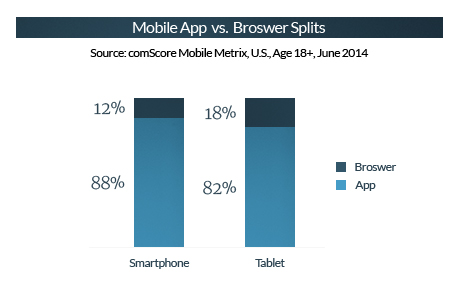 Don’t take this as advice to go out and make an app for your business, though. Apps aren’t the answer. Instead, finding your way into apps is.

For the B2B websites that saw big jumps in mobile traffic, one thing was true: They were all creating content and consistently sharing on Facebook, LinkedIn and Twitter. More so than even having a mobile website, this demand generation activity was the biggest driver of mobile success.

Getting mobile web users to your website is one thing, but keeping them there is a whole other story. This is where having a mobile-friendly website with responsive design comes in. 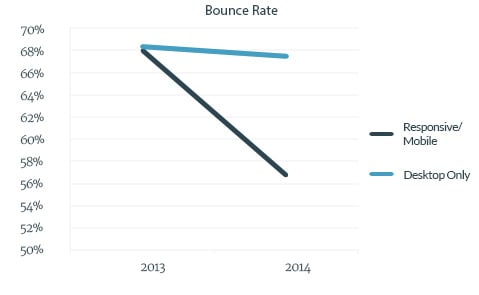 So it’s not enough to simply send mobile traffic from apps to your website. You do need to make sure the mobile experience meets the visitors expectations. Otherwise, they’re gone.

So if mobile usage continues to grow, how can B2B marketers really make gains in mobile exposure?

The data above indicates you should, at the very least:

But there are other things you can do to improve your mobile marketing.

Email is one of the most important tactics in your marketing arsenal. In the past three years, mobile email opens have grown by 180 percent with 42 percent of email opens taking place on a mobile device as of Q1 2014.

Responsive emails work just like a responsive website, reflowing to fit the user’s screen. By creating more mobile-friendly emails, you can take advantage of mobile email usage and increase clicks from mobile devices. Just remember the landing page or blog post you direct the email recipient to needs to be responsive, too.

Be Mindful of Connectedness

According the Mixpanel, the prime time for desktop usage is 9 a.m. to noon on weekdays. This certainly indicates that when people are working, really working, they’re doing it on desktop and laptop workstations.

However, mobile devices have become the default downtime devices for many users. If you’re sending information to B2B buyers before 9 a.m., in the afternoon when that 2:30 feeling hits or in the evening, mobile should be on your mind

Because of our devices, we’re now always connected, which means traditional send times for B2B buyers don’t necessarily hold true (more on that in another post). And by sending at target “work” times, you could be forfeiting traffic and leads that would have otherwise responded when they were less focused on work and more focused on working better.